Departing Fort Ross we were planning to exit the arctic as quickly as possible. Our ice and weather shore support team (Mike and Edie) let us know that we should not have much challenge with ice pack anymore. However, we were warned that a major blow was forecast (north 50 kts) in a few days. So we planned a few possible shelter spots on the chart and sailed on up Prince Regent Inlet towards Lancaster Sound. 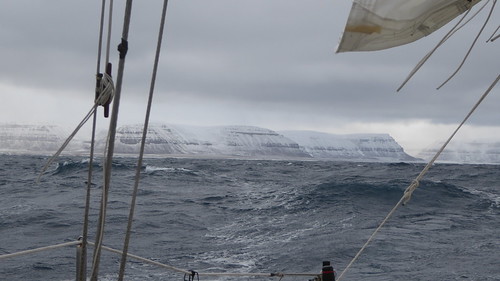 We had read and heard that many boats lose autopilot steering in Lancaster Sound, and Irene had issues as well. The magnetic north pole is only a few hundred miles away, and the magnetic field is weak here. To make matters worse, some of the islands in the Sound are magnetic themselves. Our pilot started disconnecting with error messages. It seemed like we might have to hand steer for a while with the tiller outside. 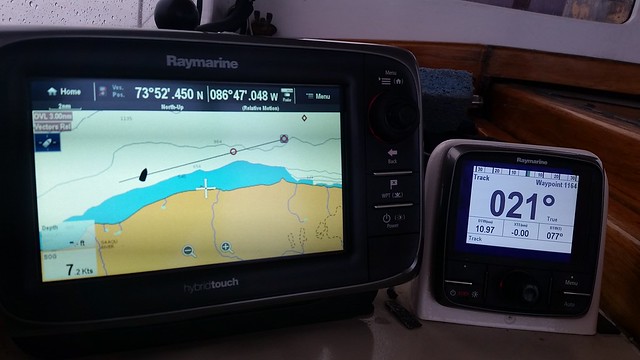 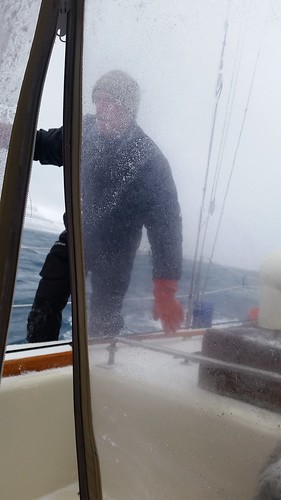 It was windy, icy and very cold outside, motivating us to experiment with the system. Anything to avoid hand steering! We discovered that by setting and “going to” waypoint after waypoint (never trying to set a compass course) the pilot could do the job. Our heading icon was showing us as 55 degrees off course but we were traveling in the correct direction. And we were warm and cozy in our doghouse! 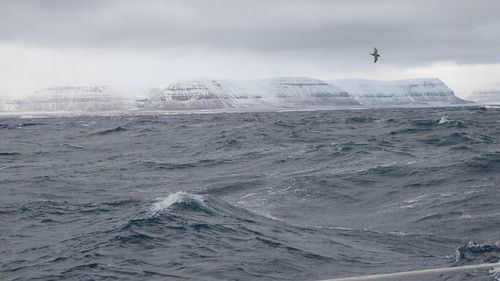 Although we were done with ice pack, ice bergs were expected. Other than sailing right into one, the worry is that a berg might drift in and block our exit from an anchorage. As we approached Tay Bay, our chosen spot to ride out the storm, we noted a gigantic berg lurking just beside the entrance. 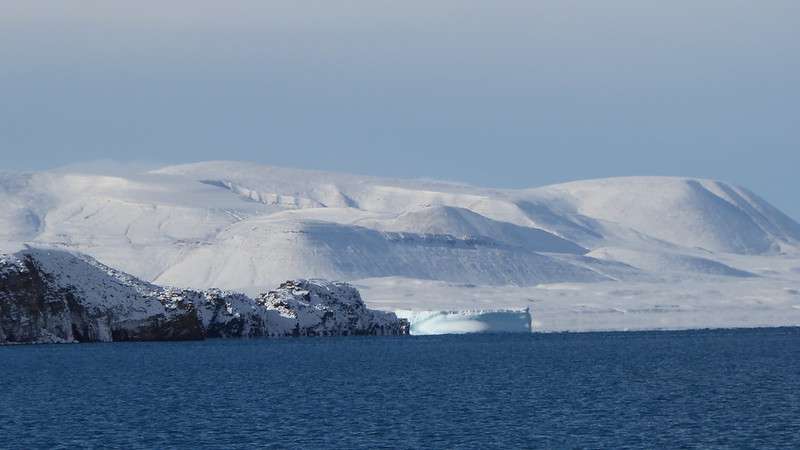 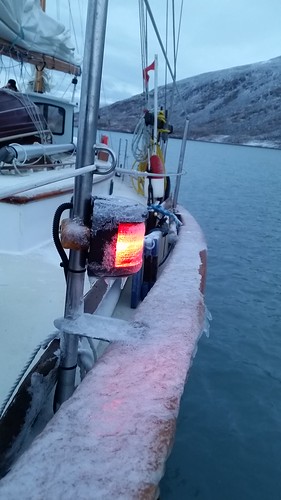 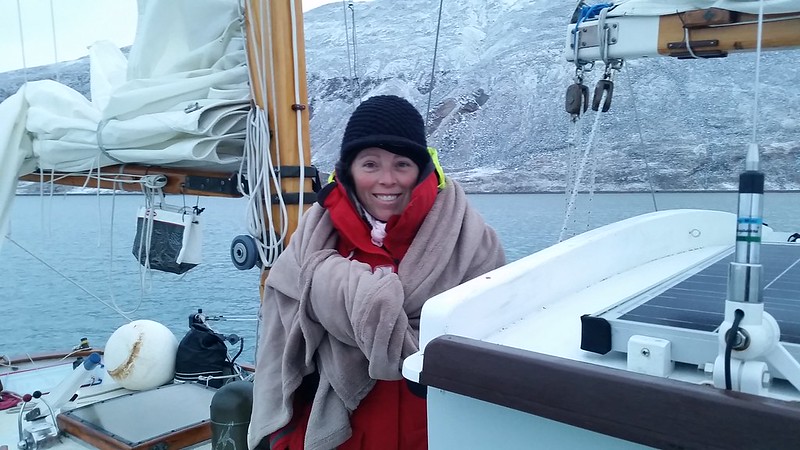 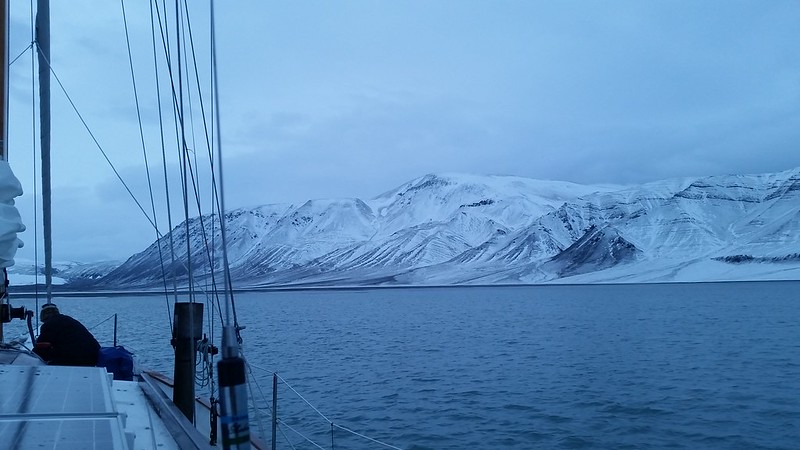 We motored slowly up the calm bay looking for a suitable spot to anchor. Our Navionics chart was not much help – really only an outline of the shoreline. A big glacier lay at the head of the bay and we were expecting glacial moraine shallows, but we encountered much earlier than expected what is called “rapid shoaling” (pretty much a vertical wall) only halfway up the bay. We were lucky to be moving slowly! We backed Irene off a bit and dropped the anchor and plenty of chain. We would have liked to set a second anchor, but we were expecting the winds to back and come from 3 directions as the storms passed. It seemed like we had picked the most protected spot, but as the wind picked up and the tide went out it was obvious that the big bay wasn’t going to be a pleasant place for us. Waves built up and we retreated down below. We endured a night of wind, waves and snow, then an amazing calm morning. The bay was stunningly beautiful. 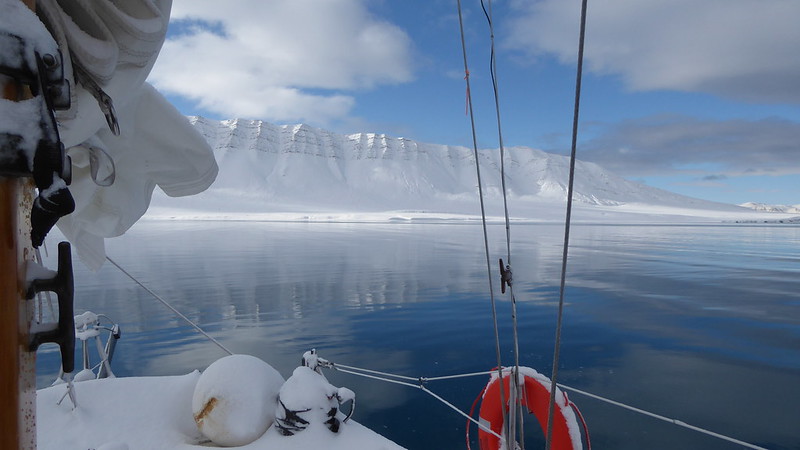 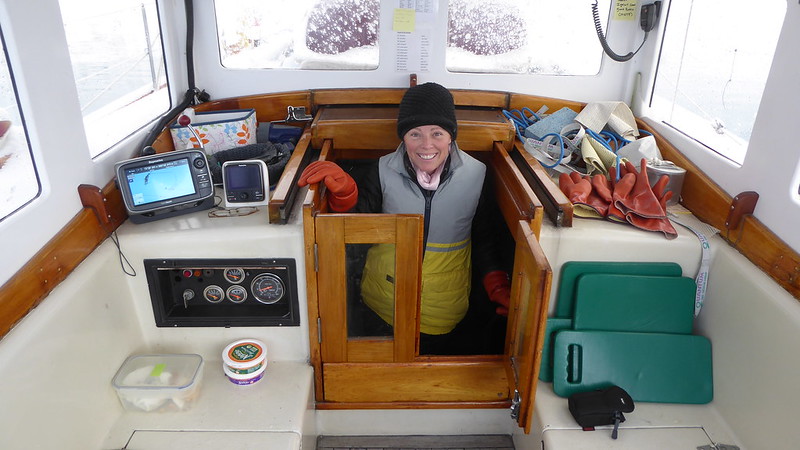 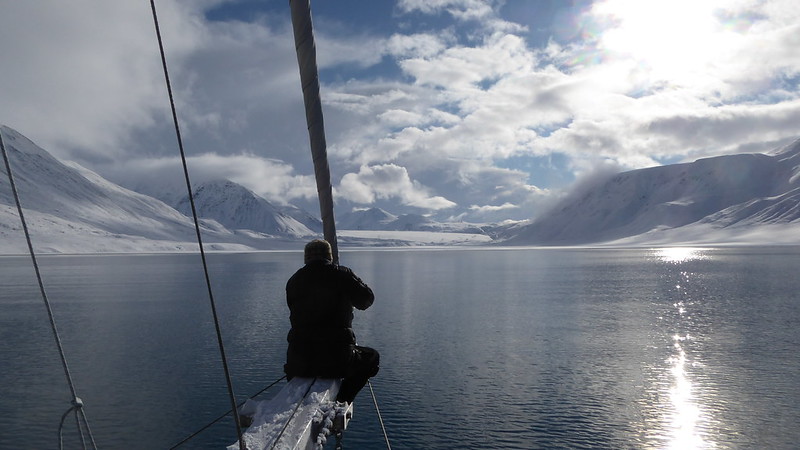 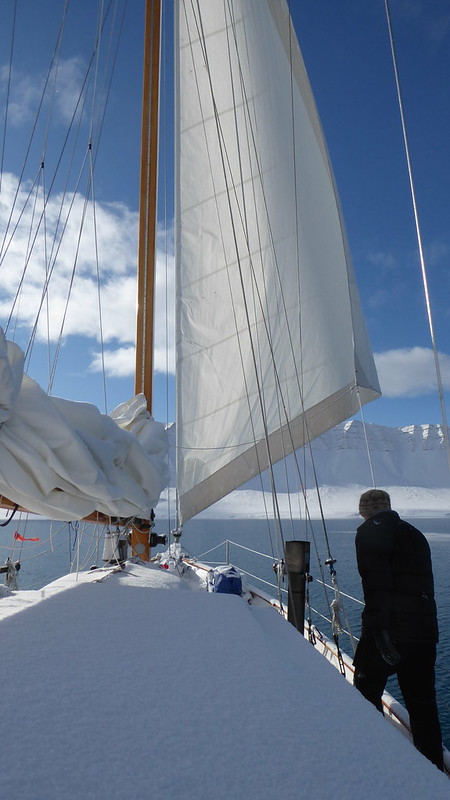 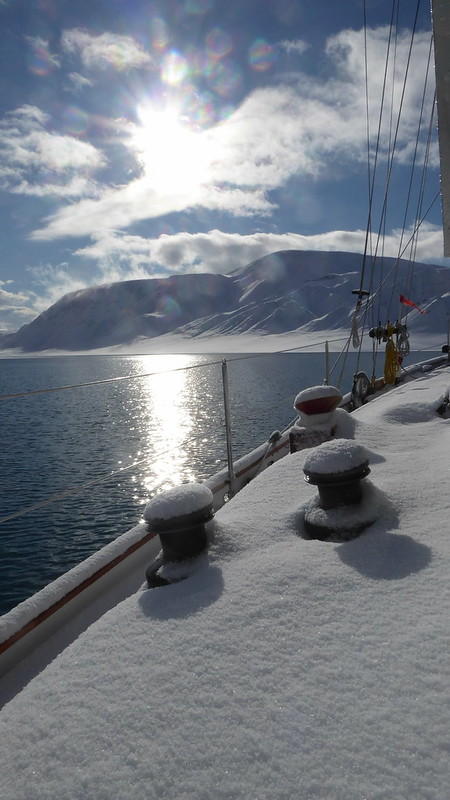 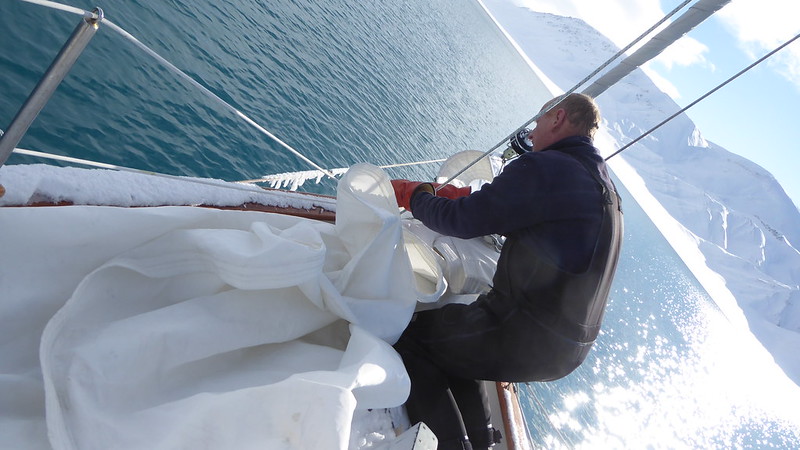 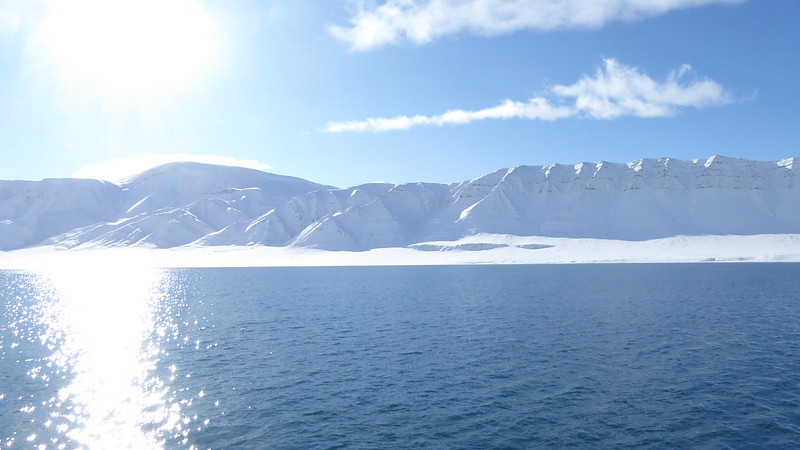 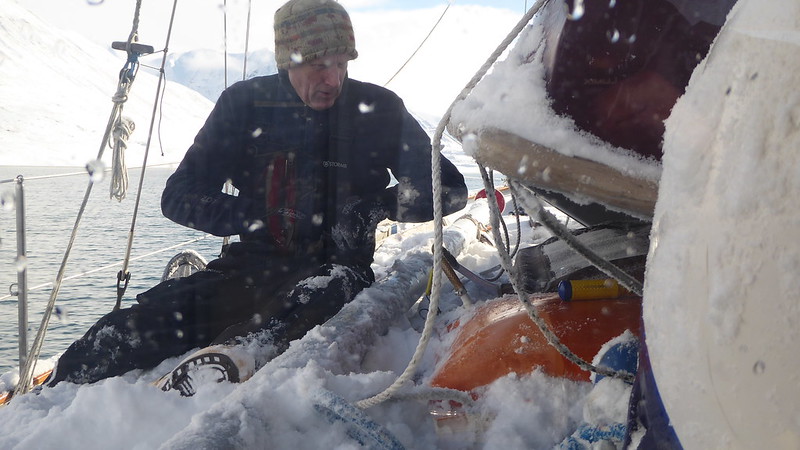 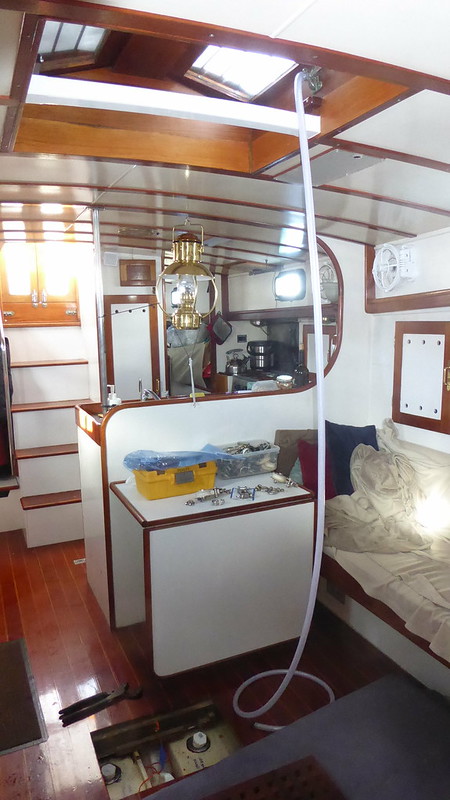 We knew the wind would be back soon and took the opportunity to transfer fuel out of the bladder on deck and into tanks down below. This would give us more stability for the ocean sailing to come. We repaired the jib tack and hanked on the staysail anticipating windy days out in Baffin Bay. We took pictures and fended off a great sheet of broken skim ice that floated off the beach at high tide and swept down on us. 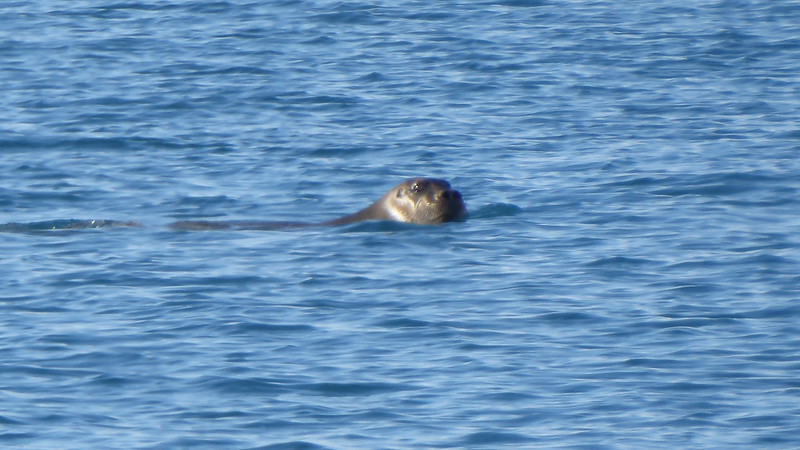 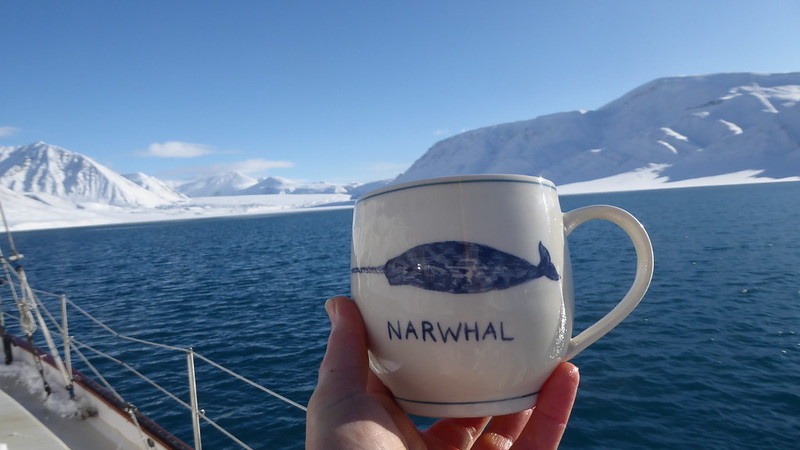 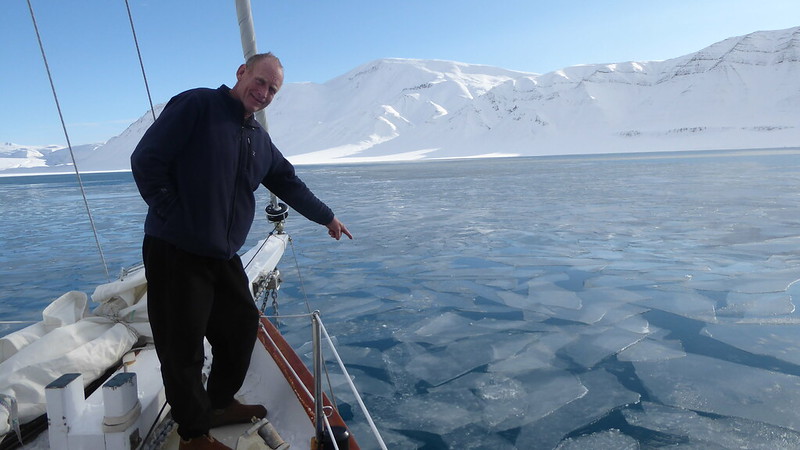 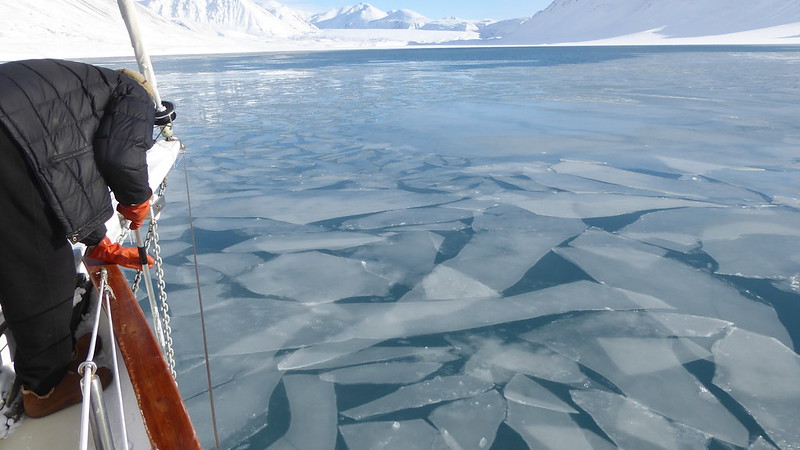 The wind came up fast again and it was fierce! It came screaming down the glaciers in great long gusts at first. We heard noises of wind in rigging we had never heard before, then the sound changed to a solid roar. Irene pitched and bucked and occasionally she would be knocked rail down. We kept watch down below, one eye on the chart plotter to make sure she didn’t drag. Not that we could do anything if she did – the way the wind was directed by terrain put our position upwind of the beach – if we dragged we would be aground in polar bear country in seconds. 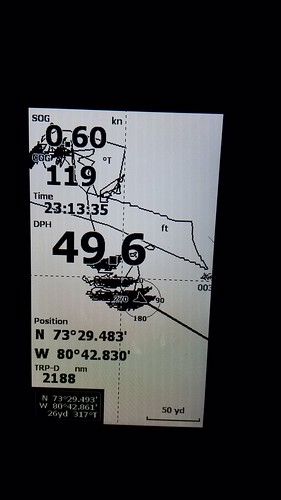 Sleep was impossible and we could only converse by shouting. Peter would go on deck every few hours and crawl forward on hands and knees to check the snubbers for chafe. As chafe occurred, a bit more scope would need to be put out, each time letting Irene get a few more feet closer to the beach. Frankly, we were terrified. Not a quick scare (phew, glad that turned out OK!) but an exhausting grinding fear that lasted for two days. We were short on sleep, couldn’t cook, and had too much time to worry about the beach and its threatening bears. We were a hundred miles from the nearest humans, in either boat or settlement. Our faces took on a haunted look. We took to referring to our bay as Tay F***ing Bay. Night turned to day and back to night and the wind kept blowing. Finally, the roar became intermittent, the waves eased, and we saw our chance to escape before the wind built again. It turns out we had chosen our safe haven directly under the path of the storm but protected anchorages are far and few between in the Arctic so we had chosen our best spot with the information we had available. 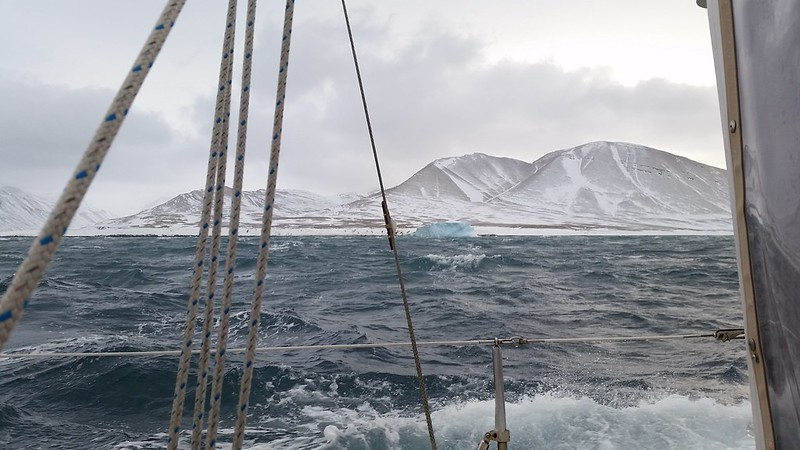 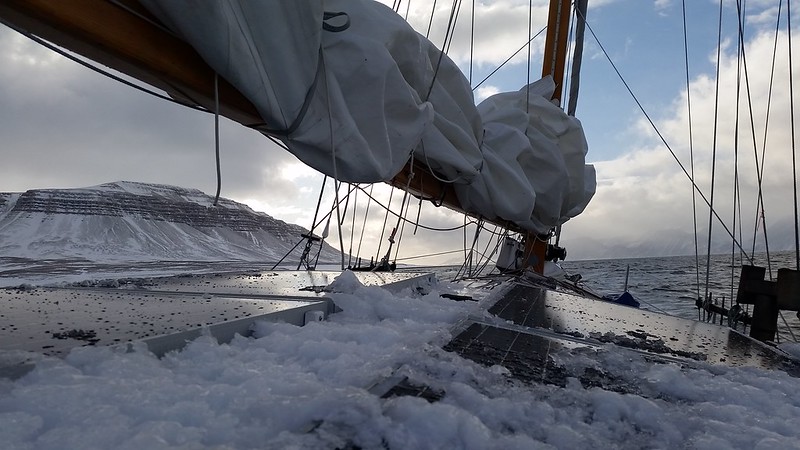 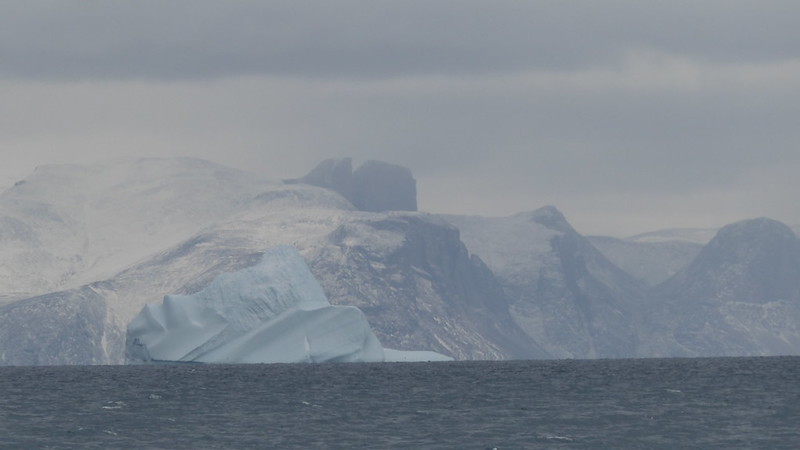 We flew down Navy Board Inlet in a strong following wind, and as we turned west into Eclipse Sound we were pleased to spot the familiar Tandberg Polar towing the Maud. We could see that she had encountered major wind, too, as the flags had been torn off Maud. 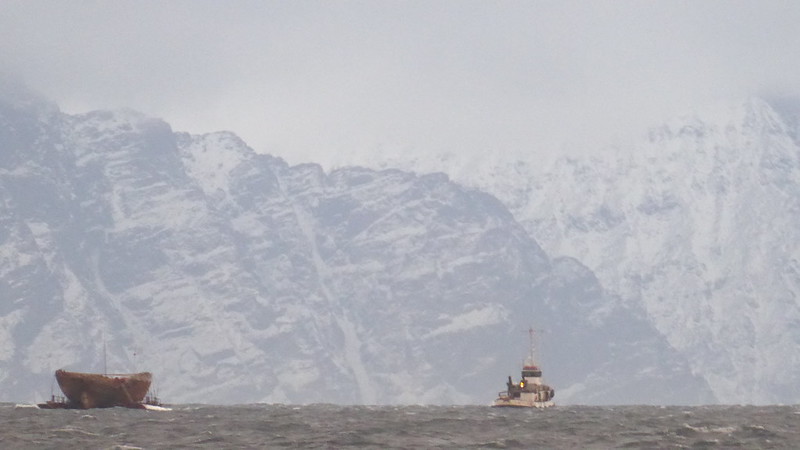 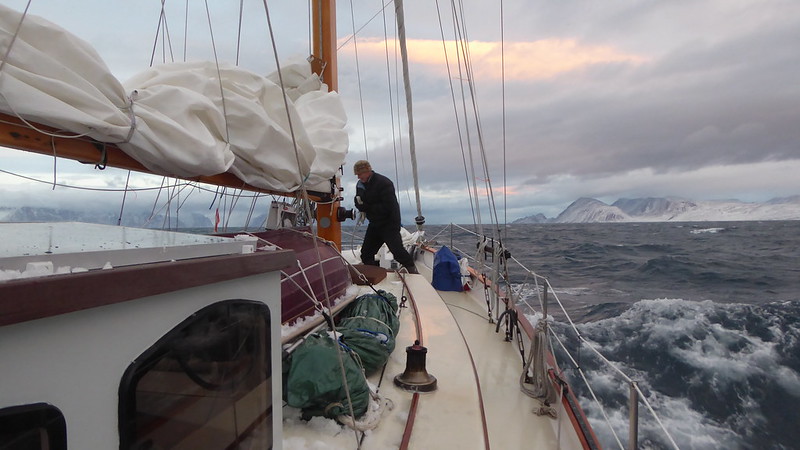 As night fell, the wind increased again, and under reefed staysail alone we charged out into Baffin Bay. Even with so little sail set we steadily pulled away from Tandberg. The captain later told us they were seeing sustained 70 kts of wind at this time. It seemed like not more than a strong breeze compared with the wind we had just experienced in Tay F****ing Bay. We were moving fast escaping the Arctic and in high spirits. The wind eased as the sun came up, and we set more sail. 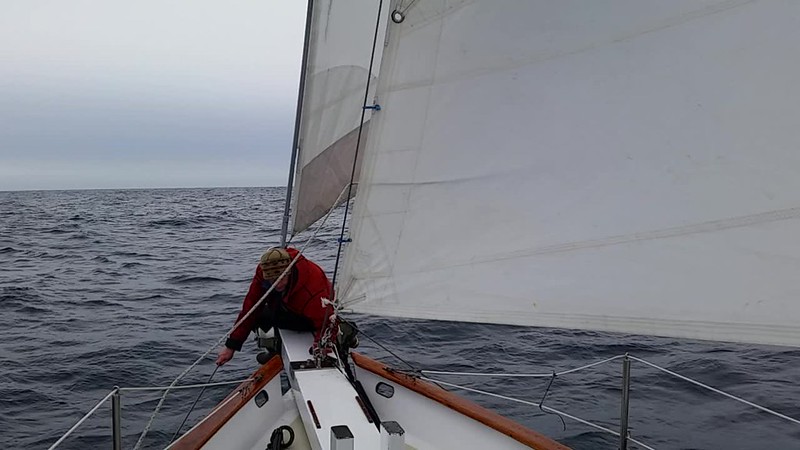 Our jib tack chafed loose, so Peter inched out the bowsprit to repair it. A wave dipped him in to his waist and filled his boots with icy water. Even that could not chill our happy mood. Open water! He was doing fine work on the bow so needed bare hands for the shackle – it took a couple of hot water bottles and a change of clothes before he was properly warm again.

Consulting with our shore support, we modified our original plan to sail directly south down the coast of Baffin Island and instead decided to head across to Greenland. The Baffin Island weather forecasts were grim and Greenland had diesel fuel stores that we needed. Our diesel situation was such that we had just enough to motor when needed but we had to spend the crossing, 5 days, at a chilly 40 degrees in the cabin. 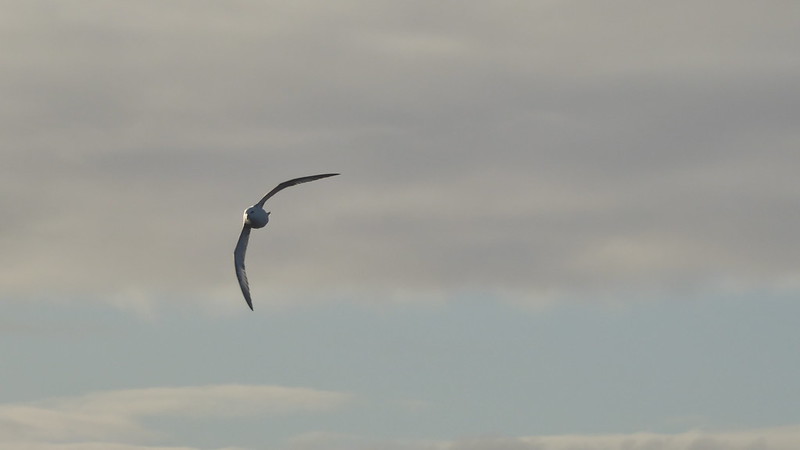