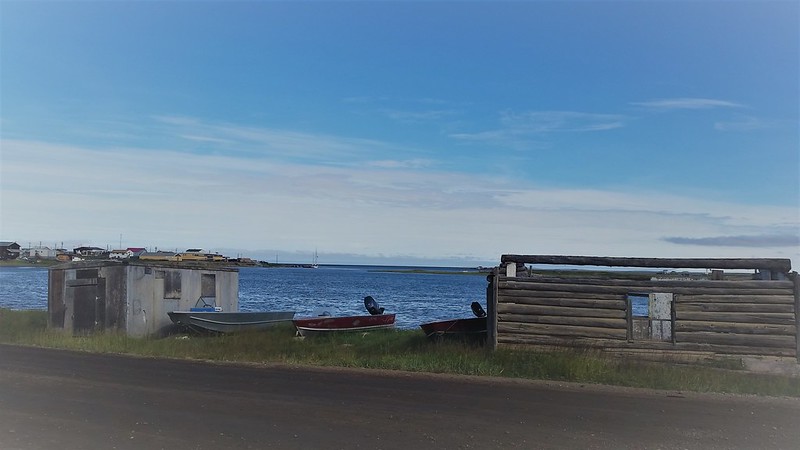 Early in the planning stages of our NWP adventure we decided it made sense to stop at the Canadian Arctic native village of Tuktoyaktuk. It was one of the few places in the Arctic that a boat could refuel without ferrying jerry jugs in a dinghy, we could clear into Canada at the RCMP outpost, and re-provision food items at the grocery store. And for Peter, it was just fun to say Tuktoyaktuk. How could we miss it? 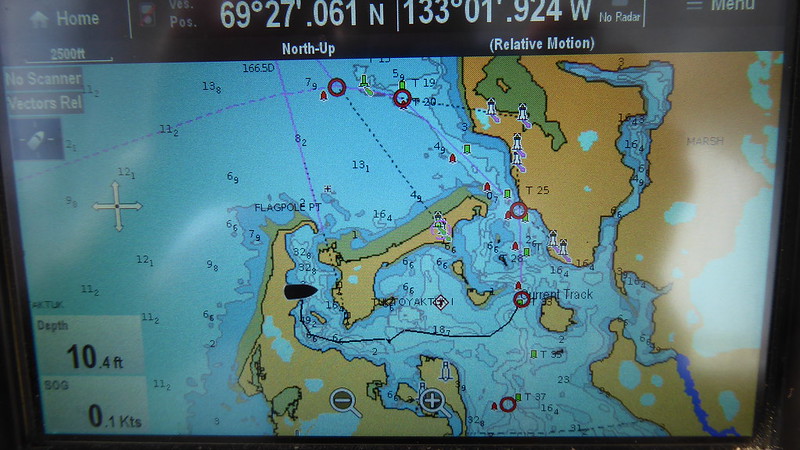 Irene threaded her way through the shallows and tied up at a small wharf according to instructions from the Mounties. 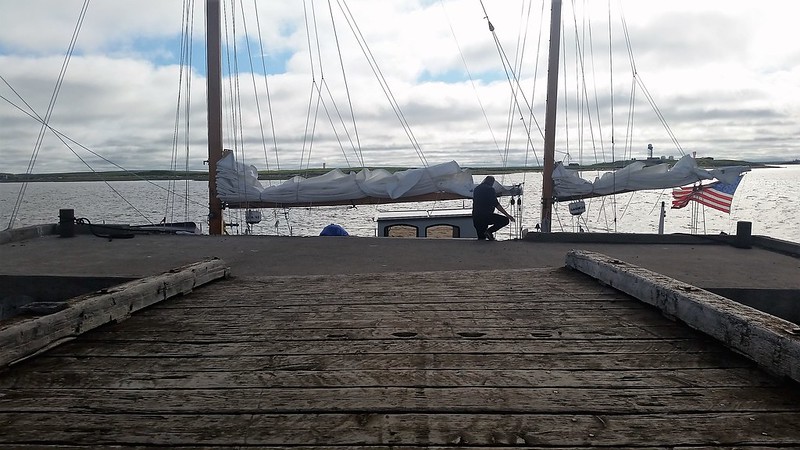 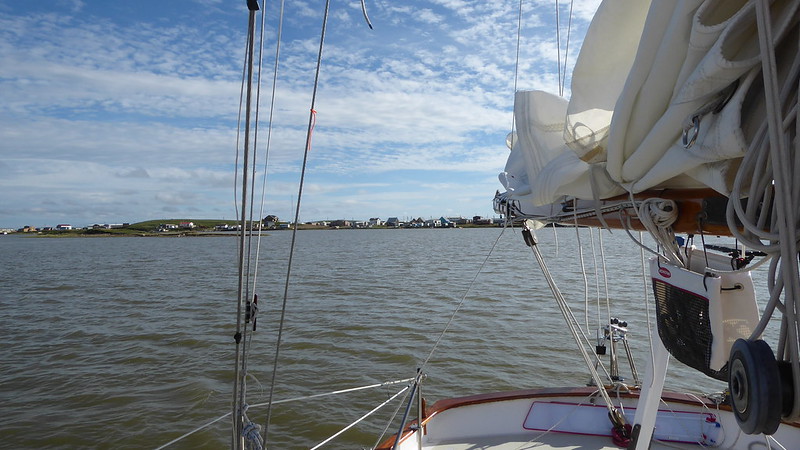 At low water we rested on the muddy bottom. Typical of river estuaries, water seemed to go up and down at random times unrelated to the tide table. An RCMP truck pulled up, drove us to the station, and processed Irene and crew into the country and even took us to see some pingos. It was probably the friendliest experience checking into a country that we have ever had. 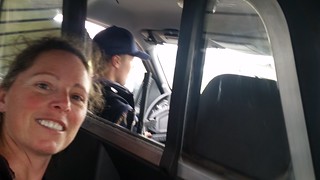 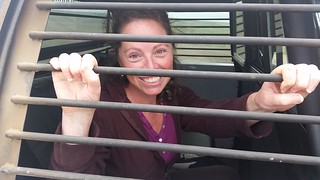 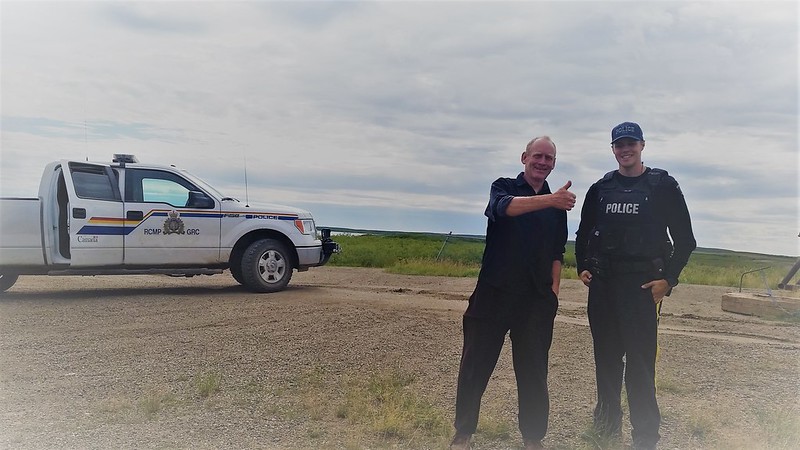 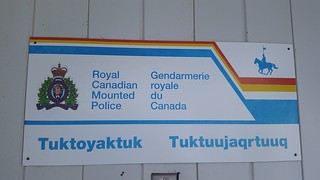 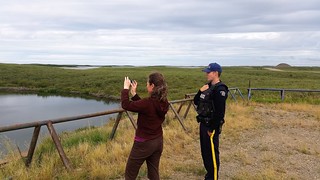 Our visit mostly went as planned – walking around town exploring, 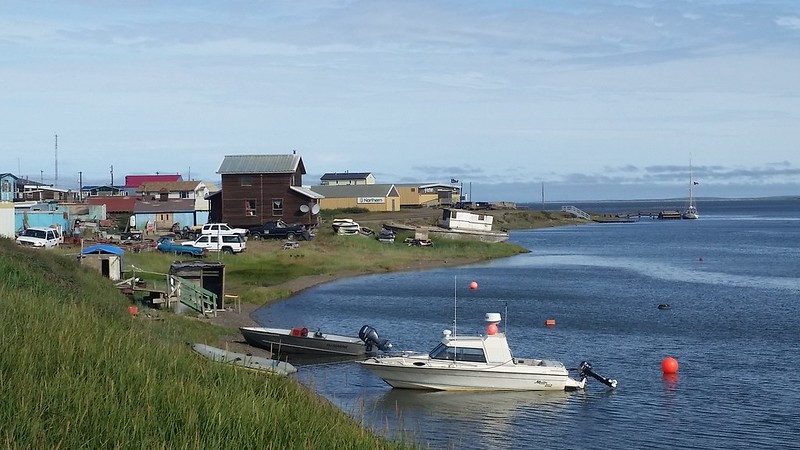 and shopping for groceries. It was a happy surprise to find one of the grocery stores right at the wharf. We learned in our explorations that all of the buildings are built on stilts over the permafrost and the water and sewer are both handled by external tank and truck. Each house gets fresh water delivered and the black water trucked away. 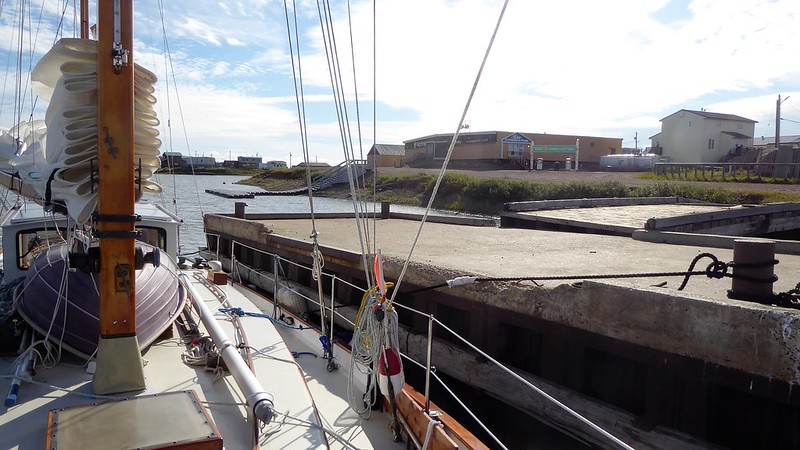 Our first hint of difficulty came when we tried to arrange for fuel. We were informed that we had arrived on a Sunday before a holiday. “Civic Holiday” is the first Monday in August and we could not get our diesel until the following Tuesday unless we were willing to pay a hefty “overtime” fee. Irene’s budget is always tight, so we declined the fee. In retrospect we probably should have paid. Game of Throne’s fans will understand when we say we reminded ourselves often that Winter Is Coming!

We made use of our extra time exploring the village, finding a generous hostess for a shower(!), beach combing for firewood and looking for a fender board. Even though Tuk is well north of the tree line, lots of wood comes down the great rivers of the Canadian north and finds its way to the beach. We knew a fender board would come in handy at the wharf walls we expected to encounter later in our voyage. 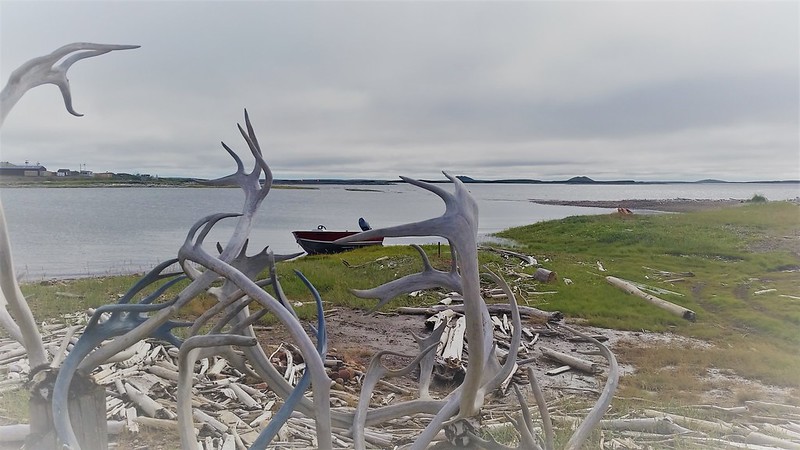 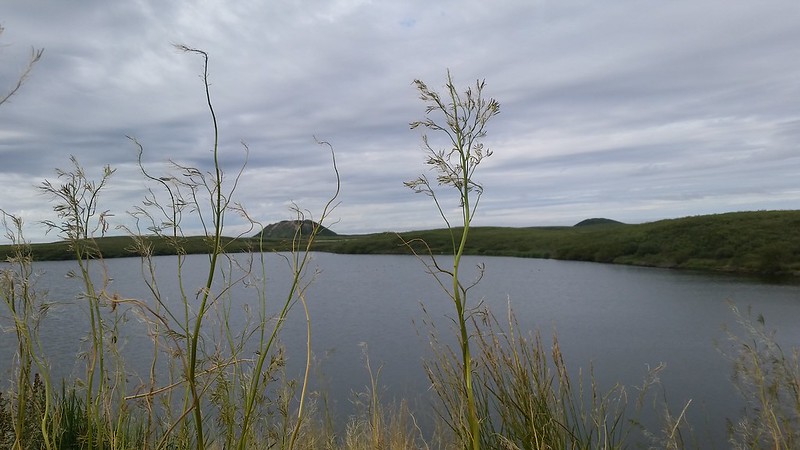 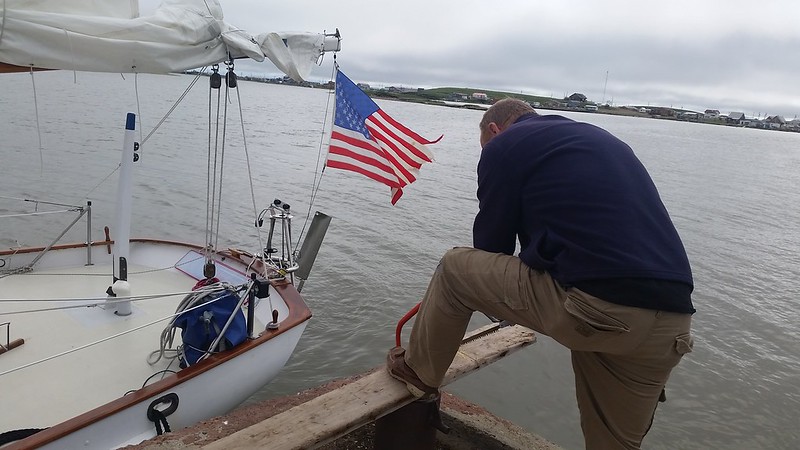 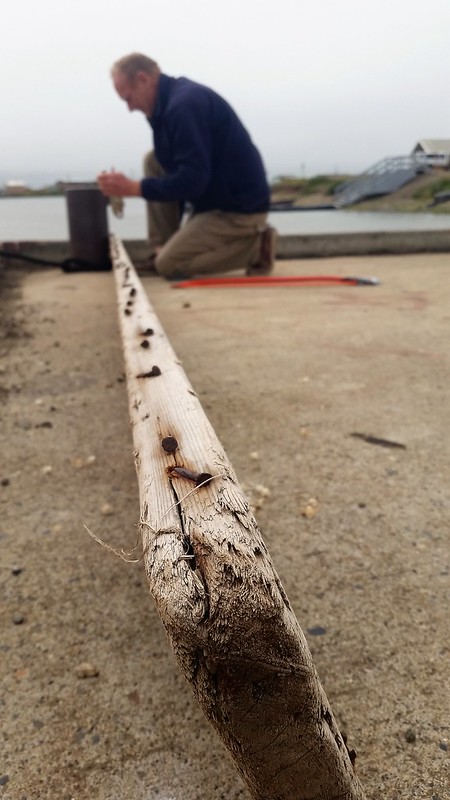 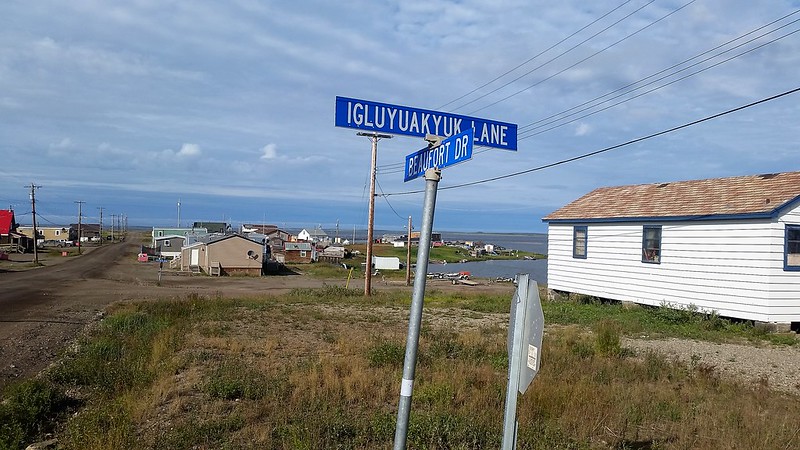 The weather was amazingly hot and the days long. It was truly enjoyable to hang out on board Irene at the wharf. Local boats whizzed around – some towing floaty toys like the scene a hot day at Lake Washington in Seattle! 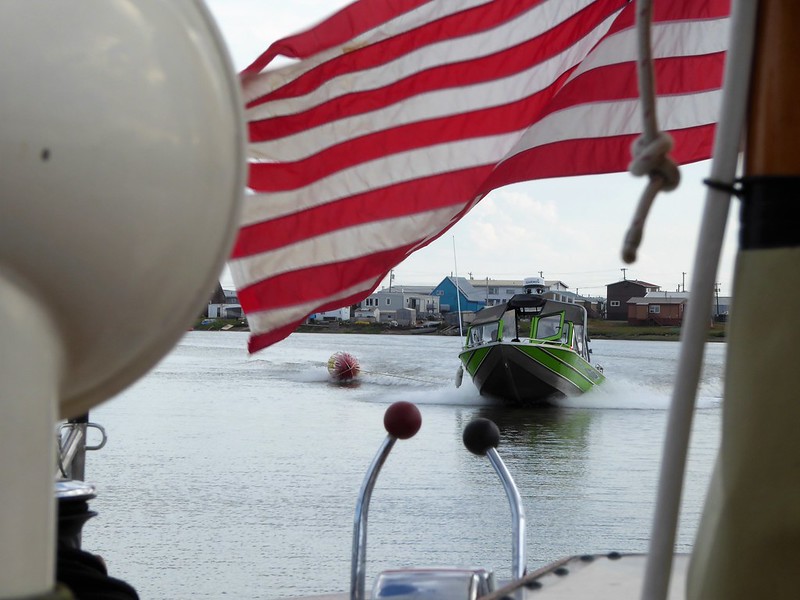 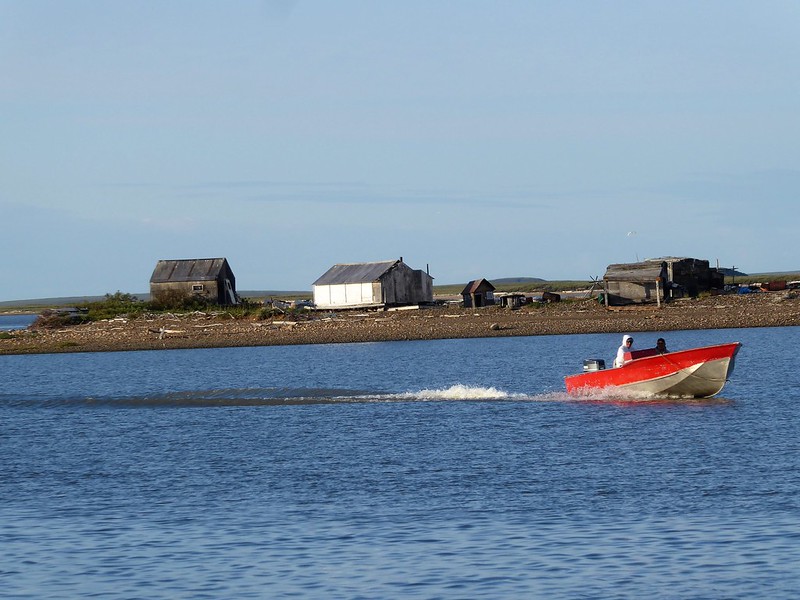 It was pleasant enough waiting, but Tuesday rolled around and we were happy to see the fuel truck pull up. We were very ready to get moving again. 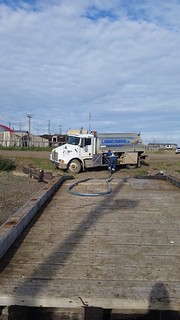 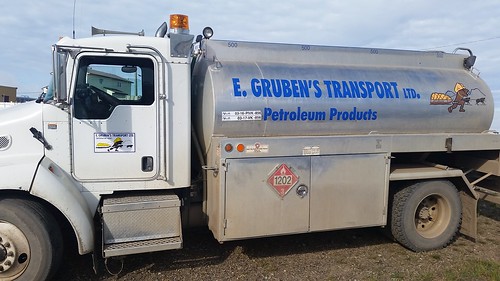 Water depth and wind did not cooperate. Even with Irene fully fueled and groceries aboard and crew eager to go, we had to wait yet another day to get conditions favorable to escape. As we motored past the fish camps that seem to surround many Arctic villages, we agreed that the visit to Tuktoyaktuk had been wonderful but that we had paid a high price in days not making progress toward the ice – because of an extra 100 or so miles off the direct NWP route and shallow water, holiday schedule and headwinds. No worries, we thought. We can make up lost time over the next few days.

One thought on “Eastbound Detour to Tuk”