A day after leaving Nome, at 1550 local time, Irene crossed latitude 66°33’46.9”N (the Arctic Circle) northbound – officially beginning our Arctic adventure. We felt good, we were as prepared as we could manage given limitations of time, budget, and our abilities. Of course, we were carrying some doubts and worries as well. We felt somewhat like lightweights among the fully crewed metal adventure yachts we had met in Nome, with rigging as thick as Peter’s forefinger. “Experts” had been offering their unsolicited criticisms of various aspects of Irene and crew all during the long preparation and approach. (Interesting – seems the less experience a commenter has, the more convinced they are that we are doomed!) And no one who has read any Arctic history can forget how many sailors died attempting the Passage. Well, we knew we had plenty of food in any case! And the long, long daylight was very, very good for morale. 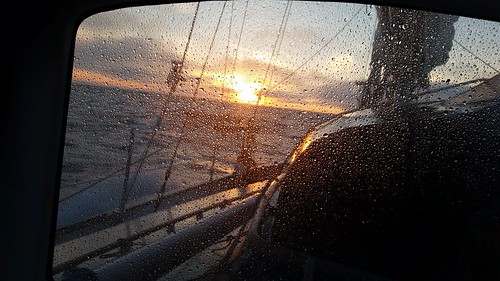 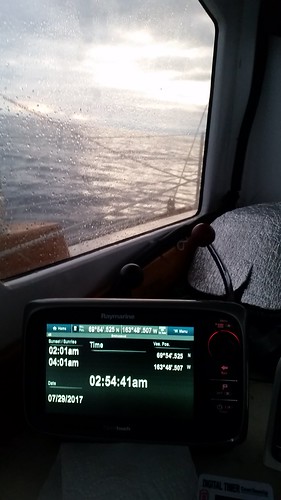 We passed close to Russia in fog, and at the northwest corner of Alaska near the town of Barrow, we altered course to an easterly heading at last. A blow was forecast, so we tucked into large and shallow Elson lagoon to anchor in about 10 feet of water. After winching Peter up into the rig to fix a damaged light, Ginger took a picture and enjoyed the warmth and tranquility. 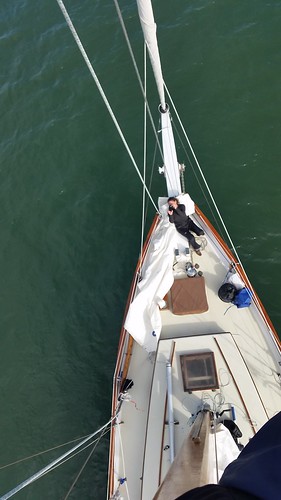 The wind rose, and a nasty chop developed, so after unsuccessfully trying to find more shelter in even less water, we decided to head back out into the Beaufort Sea. We figured it would be wise to escape before the pass became impassable and trapped us in the lagoon. We motored for a while straight into the wind in a nasty short chop and increasing fog to get some sea room, then set sail, turned the foghorn on and hove to in blessed comfort. We listened to VHF conversations between commercial vessels trying (and failing) to find shelter and felt very grateful to have left the lagoon in time. 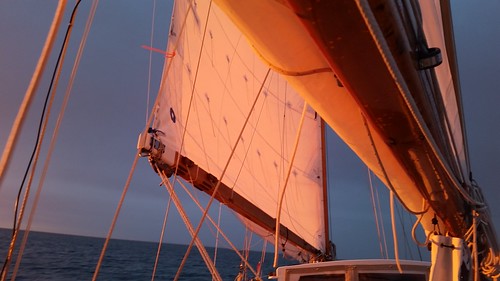 A few hours later Peter came on deck, foghorn still blaring, and was greeted by a nice light sailing wind and perfect visibility. Weather changes fast in these latitudes! We quickly set sail, adjusted the windvane, and headed on east. 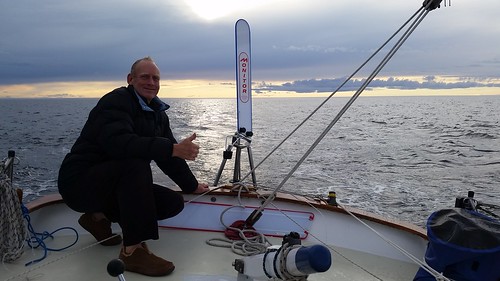 Just east of Barrow we passed within radio range of a westbound boat – Austrian vessel Nomad – and had a nice VHF chat. We knew from following their blog that they had wintered in the Tuktoyaktuk area, so we had been keeping an eye out for them. We had last seen them in Cape Town years ago. Wolfe warned us of ice ahead, and recommended that we stop at Cross Island if we wanted to see polar bears. 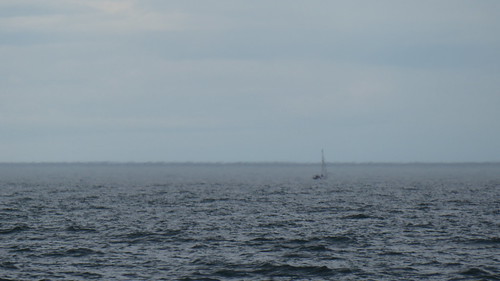 Sunlight is low and rich during the long sunrise and sunsets. 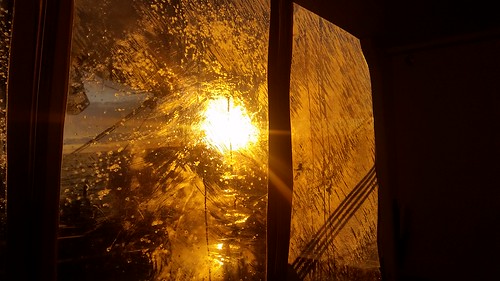 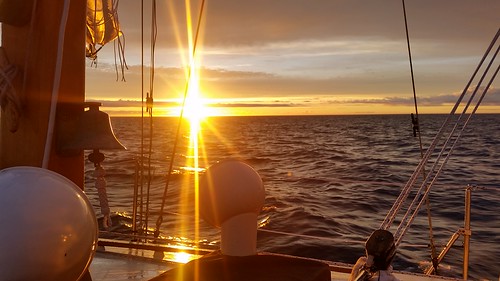 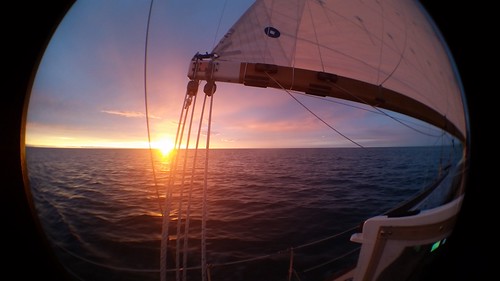 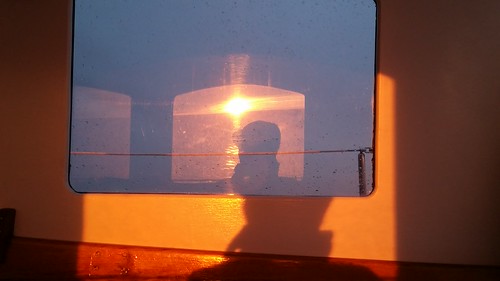 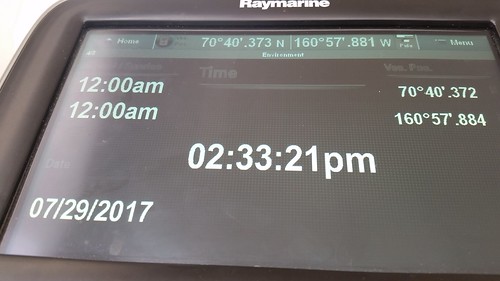 We enjoyed two days with no sunset (top left corner of the chartplotter shows sunrise and sunset) proving that midnight sun does exist! 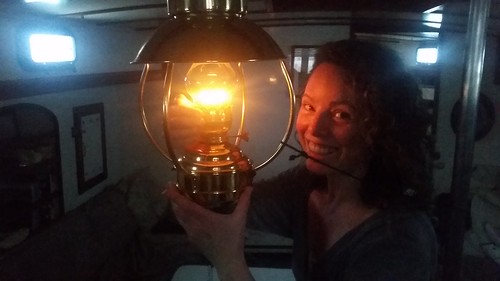 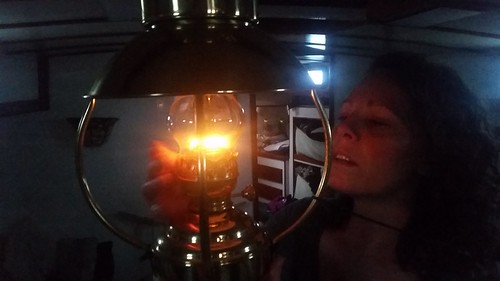 The kerosene lamp burning during the short night provides a little bit of welcome heat and nice low light in the cabin.

Irene entered a band of broken up ice that was well delineated on ice charts as “one tenth” coverage. That doesn’t seem like a lot, but we zigged and zagged like crazy to work our way through. We had a nice reaching wind, perfect for maneuvering. At times it felt like a video game – Irene as a spaceship at warp six (oh, I mean six knots) in an asteroid belt! 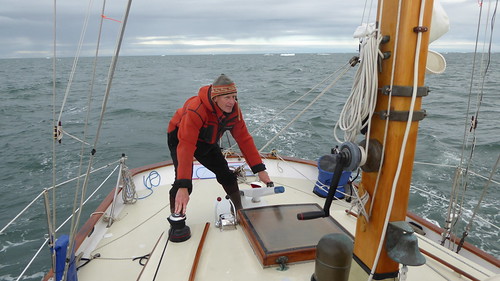 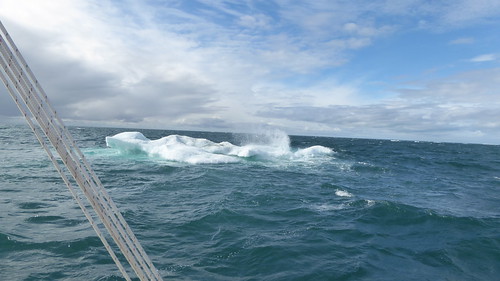 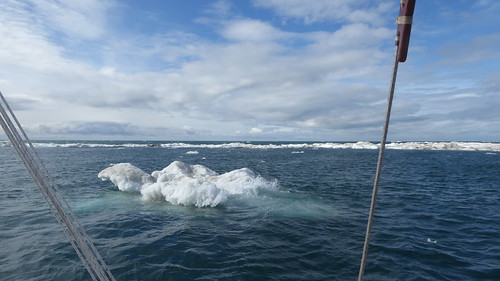 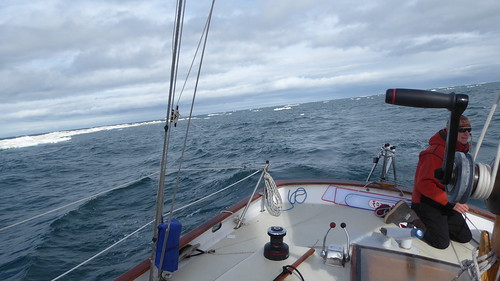 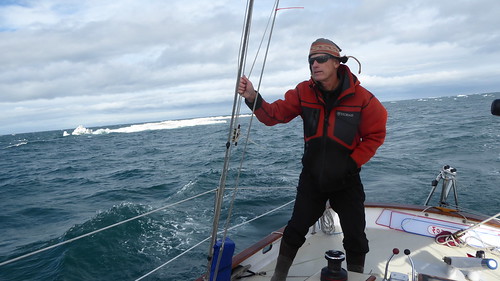 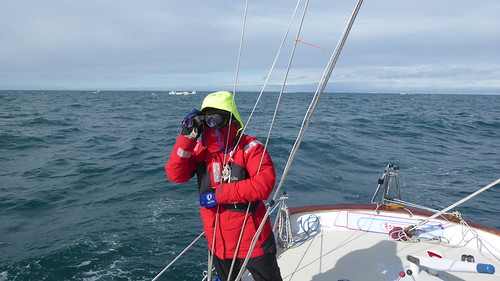 The terrain in this part of the NWP is flat and featureless, and the ocean is very shallow. One ever present danger is the possibility of running aground on an abandoned oil well. These are unmarked and uncharted gravel bars, and indeed we encountered one or two. Luckily Irene’s relatively shallow draft of six feet allowed us to pass over without grounding. 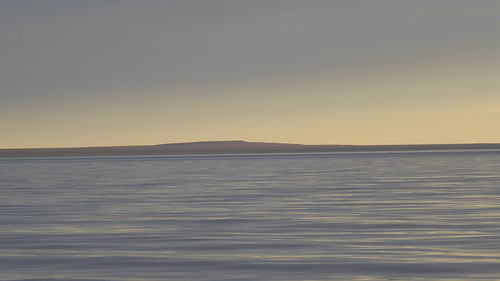 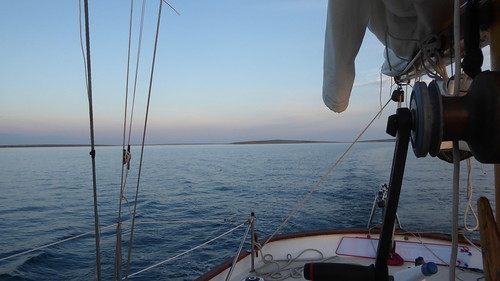 We continued day and night aiming for the anchorage at Cross Island. Looking for bears!

2 thoughts on “Into the Arctic!”