The varnish on Irene’s cap rails was cracked and peeling, and the weather forecast for the last week of August in Wrangell promised a couple of rain free days. Also we had A/C power available at the dock, so we decided to strip and revarnish. 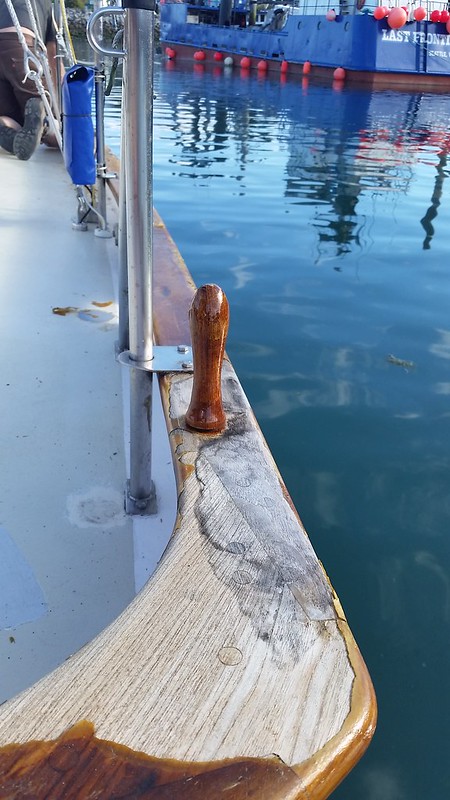 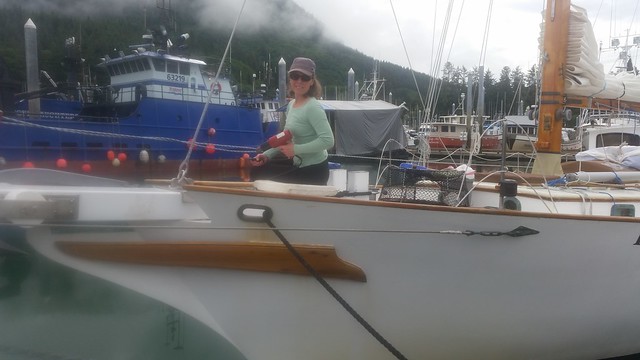 Ginger removed the old varnish with a heat gun and putty knife. 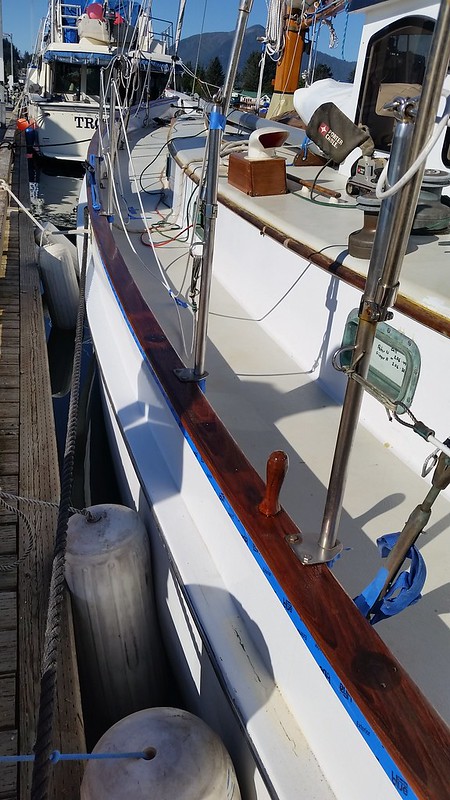 We sanded, taped and varnished in quick succession. The weather gods were kind and soon the project was done. Is it super yachty and can you see your face in the finish? Nope, of course not – but it looks good from a distance and fits Irene’s standards. 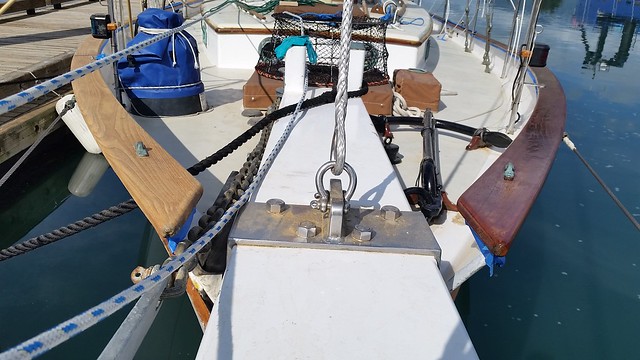 Working on the rail, we looked down into the water. Irene’s waterline had seemed to sprout a luxurious crop of long green grass overnight. 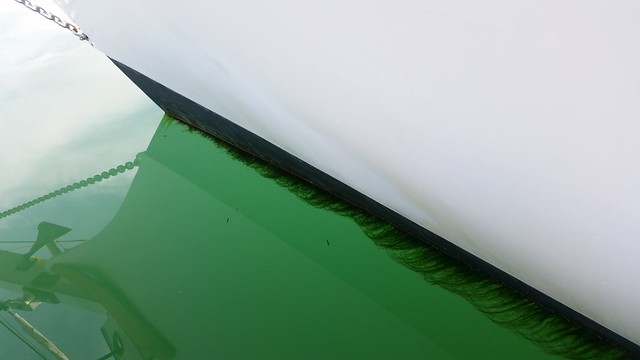 Also the zincs were looking small and the prop could use a good scrubbing. So we determined to take advantage of one of Wrangell’s tidal grids to take care of these issues. The harbor master’s office gave us permission and even drove us out (five miles to the south harbor) to check it out at high tide. The next steps were consulting the tide tables and a scouting hike to the grid at low tide with a tape measure and notepad. We wanted to be sure when Irene arrived at high tide that she was positioned properly fore and aft over the cross beams. It was good to see that this particular grid had a section of closely spaced cross beams, ideal to support Irene’s keel. 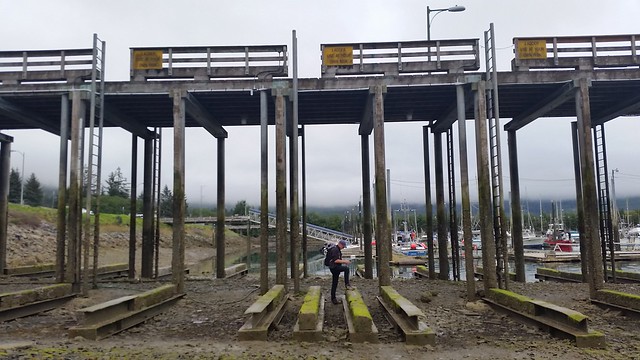 Arriving just before high tide the next evening, Irene was tied up to a nearby float for a few minutes to wait for the high, then came alongside the grid. 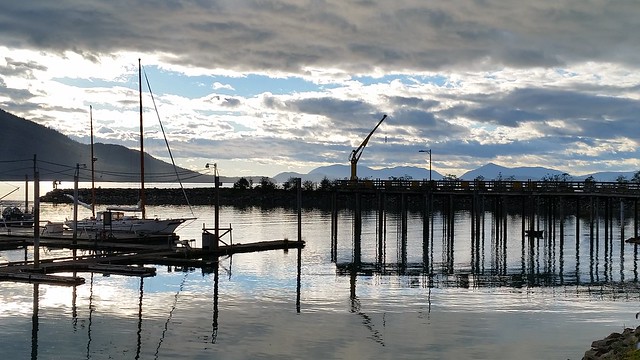 We lined up our marks and tended the lines as the sun and tide went down, not wanting to go to sleep until sure the keel was firmly on the beams in the correct position. 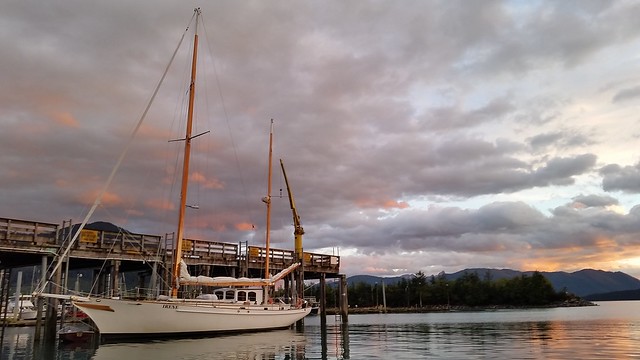 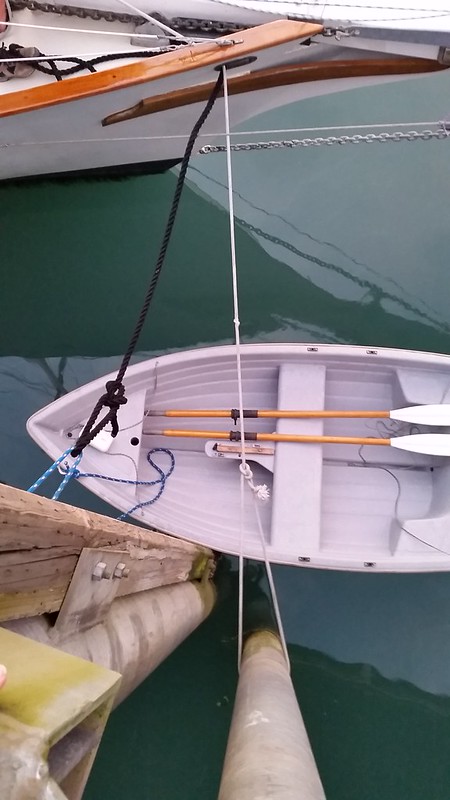 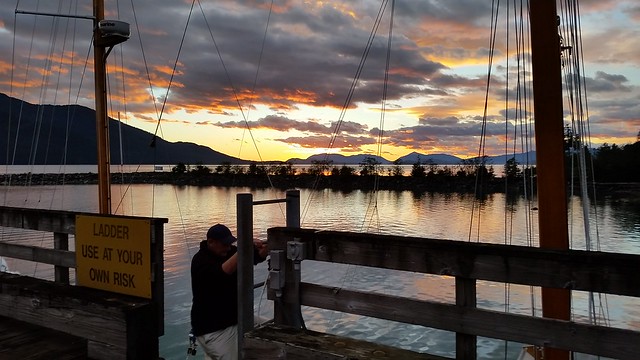 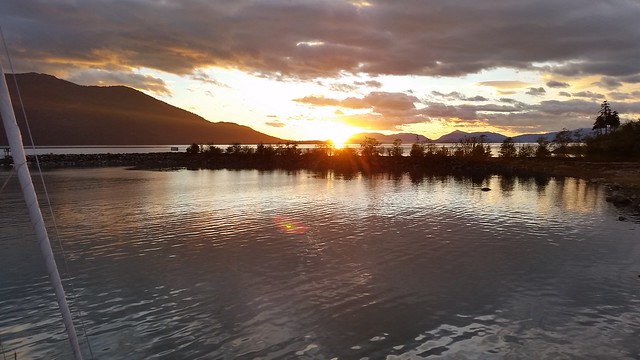 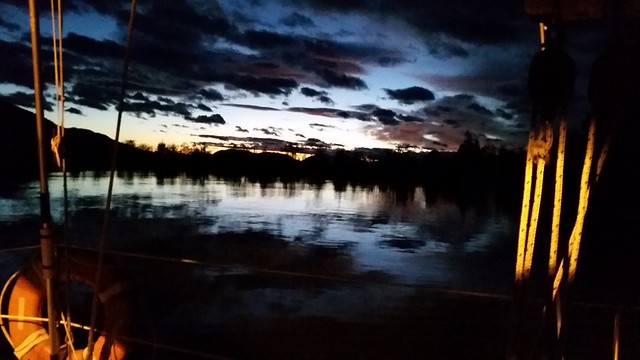 Soon Irene stopped dropping with the tide. We went to bed for a short uneasy sleep (an unfamiliar lack of motion put us on edge) and by three AM we were high and dry. 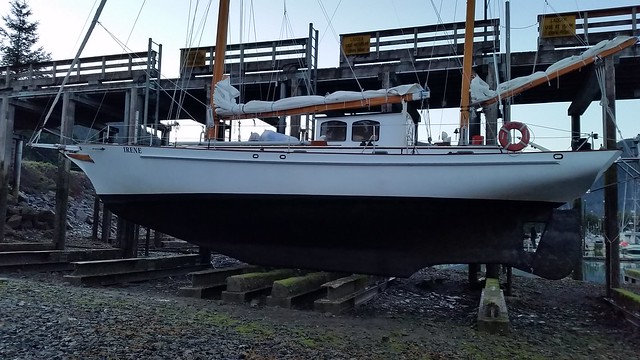 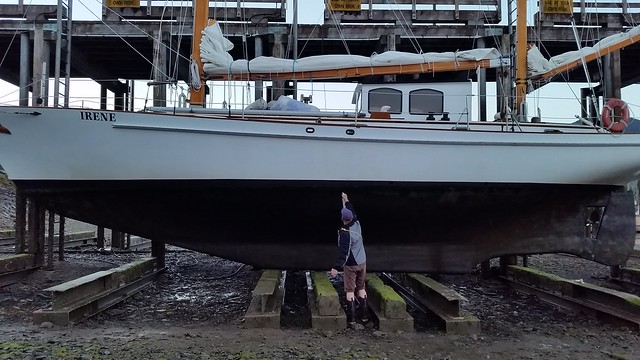 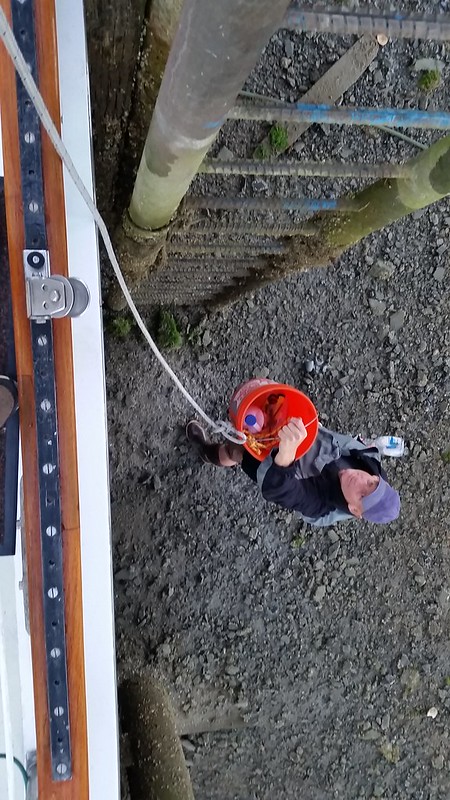 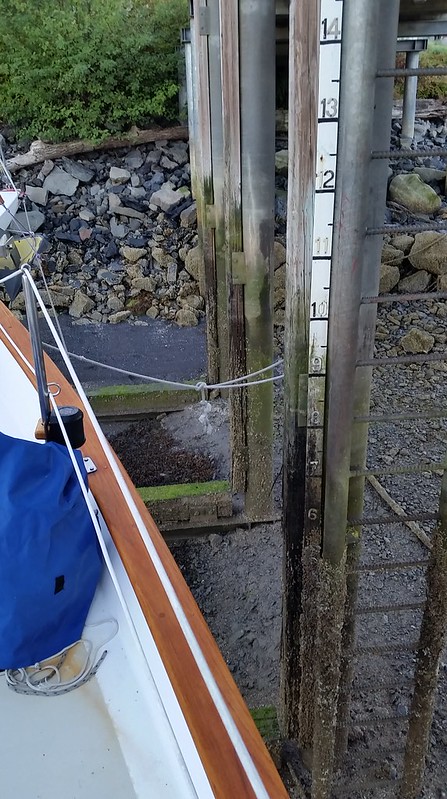 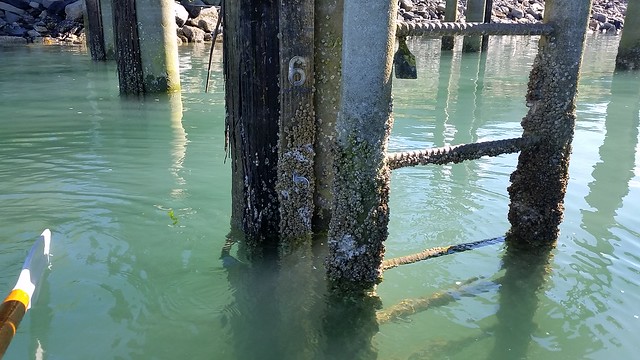 We scrubbed and inspected and all too quickly the tide flooded in. Peter was knee deep by the time the zincs were replaced. 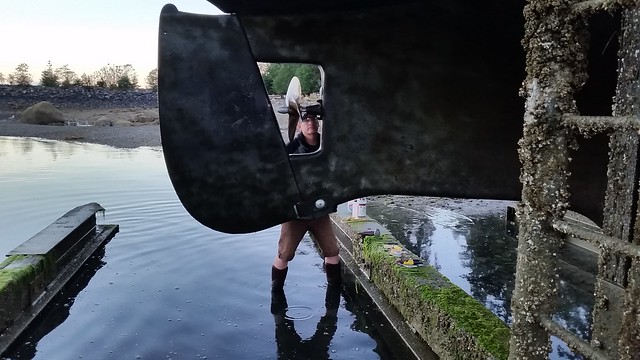 Work done until Irene floated again, the crew took a break on the beach. Mist and tide rolled in. 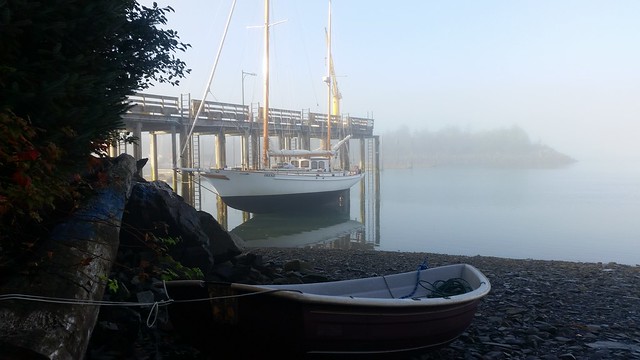 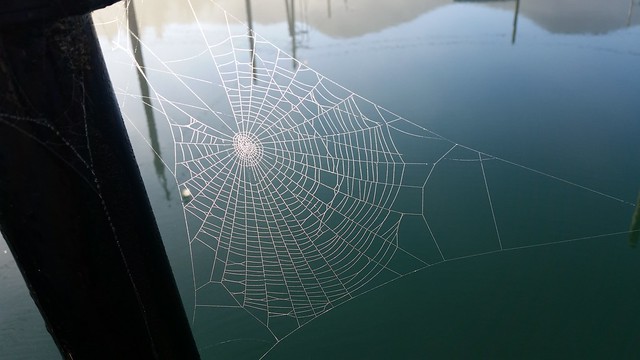 We weren’t sure that we could float on the next high as it was several feet lower than the high tide we had arrived on. By our calculations we knew it would be very close. Tide tables are just predictions that can’t take into consideration other factors such as weather and glacial melt. We were aware that if we pushed Irene out of position on a marginal high tide but still somehow unable to clear the grid that the boat could tip over or be damaged by taking weight in the wrong place as the water receded on the next ebb. Luckily we slid off nicely with a little reverse throttle and a push on the pilings just minutes before the actual high tide. 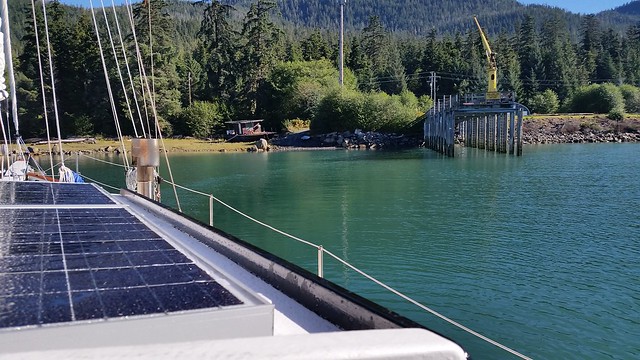 Irene departed the bay with clean bottom and lots of travel time left in the day, and her crew was thankful that the whole experience had been drama free.

8 thoughts on “Cap Rails, Zincs and Cutting the Grass..”