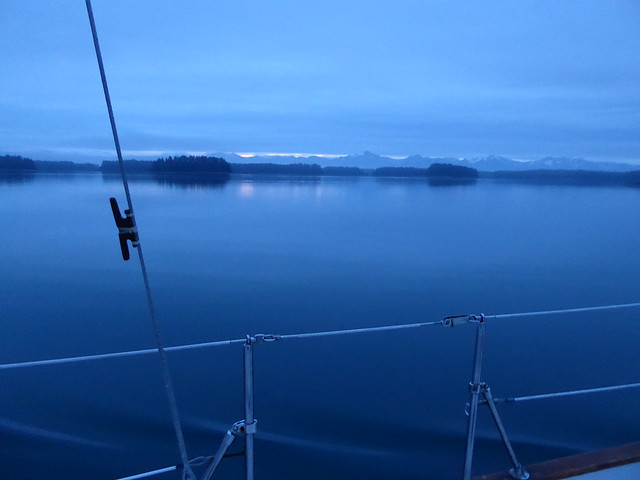 Between Prince William Sound and Southeast Alaska are 350 miles of open ocean. It’s possible to hug the shore and find anchorages along the coast but much of the coast is extremely shallow with few spots protected for anchoring. So, with a weather forecast of building wind in a couple of days, we set out for Yakutat hoping to beat the big wind and possibly meet some friends headed in the other direction. We arrived August 5th at 3AM and motored toward the outer buoy at our slowest idle waiting for dawn. 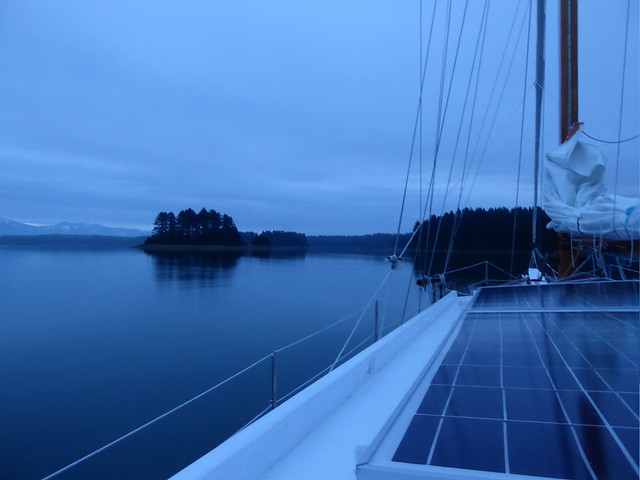 The skies lightened at 4:30AM revealing the serene Yakutat Bay enough to avoid crab pot buoys and make our way to the harbor. We met the pilot boat captain on the dock who gave us some directions for walking to town and we set off on foot. 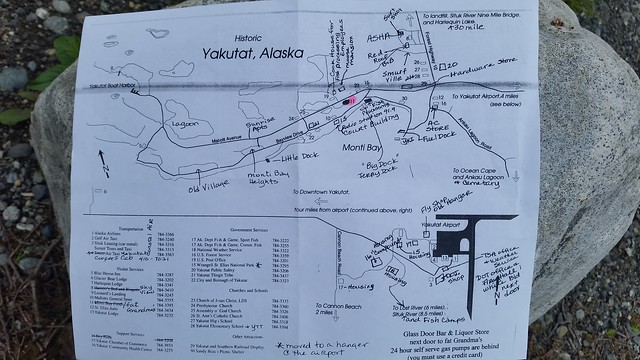 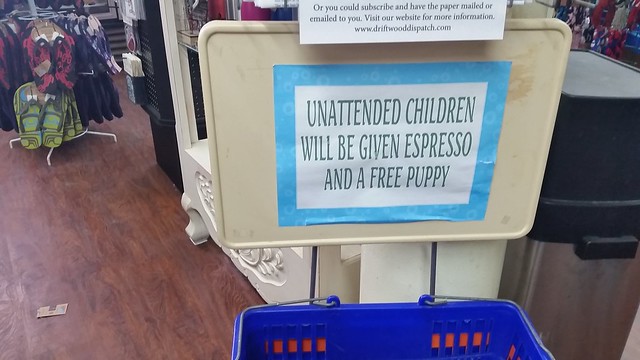 We found a map of town at Fat Grandma’s store, where we were impressed by the store rules. Our loop through town was a welcome bit of exercise and as a bonus we got enough internet to check email, weather and procure a roasted chicken at the local grocery store. 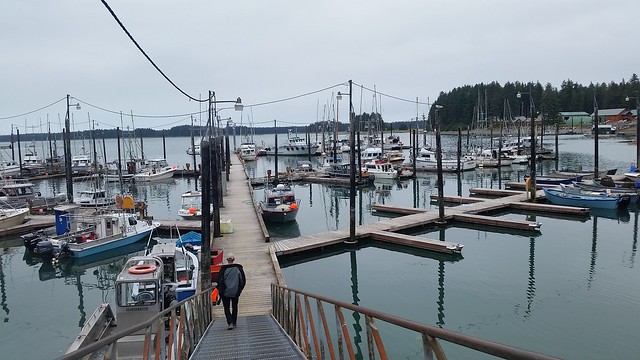 Our internet email check revealed that we had missed a rendezvous with our friends by a couple of days, such is the sailing life. So, with a forecast of building favorable winds we slipped the dock lines and continued our trip south. 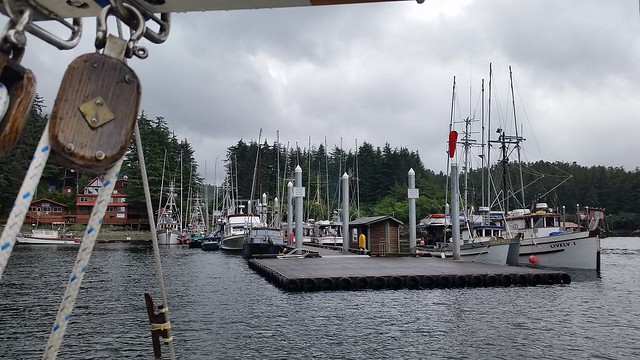 Elfin Cove! Everybody talks about it, we’ve been told for years that it is a not-to-be-missed boardwalk town. As we blew in to SE AK with the building winds we were happy to see Elfin cove right in front of us, so we maneuvered Irene to a small empty spot on the crowded dock and stepped ashore to explore. 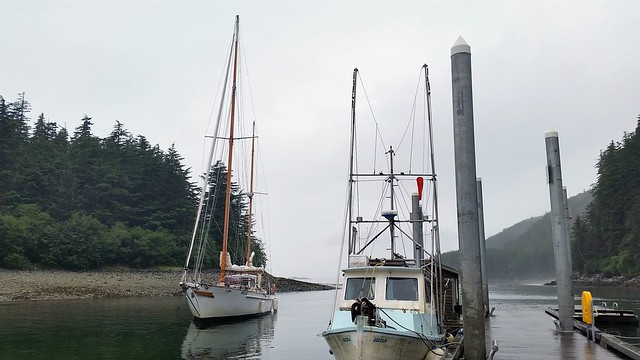 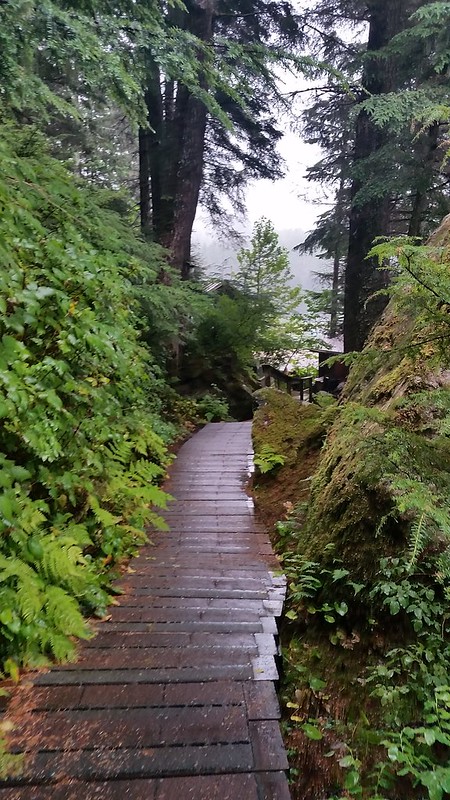 The boardwalk connects the houses and follows the water’s edge to the head of the bay. 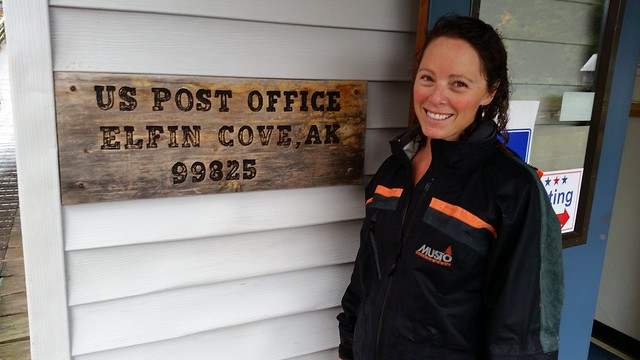 It is a rocky steep slope surrounding the cove so houses are mostly built on stilts. 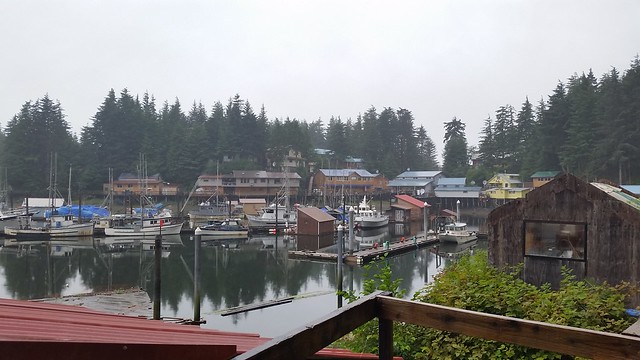 We loved visiting a town that has no cars, where we heard there were a few ATVs but saw none driving during our visit. 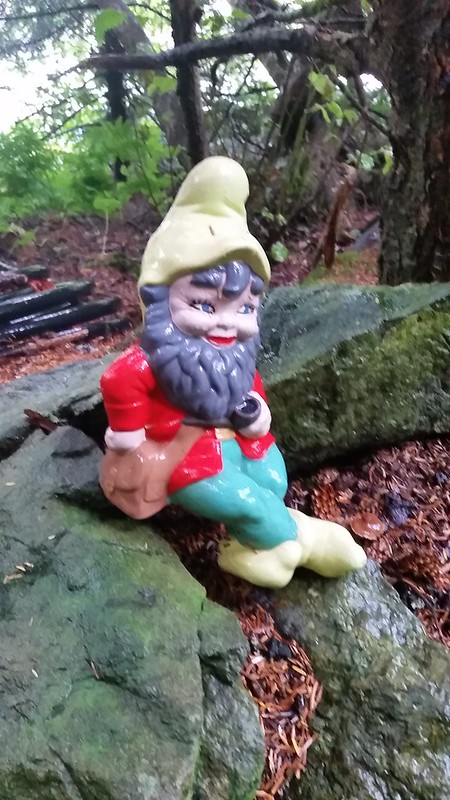 Someone has taken the town name to heart and has hidden elves along the path. We found the real elves of Elfin Cove in their element with all the rain and hard at work doing clever things. 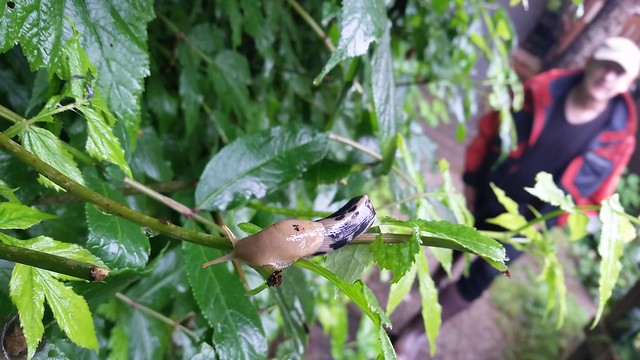 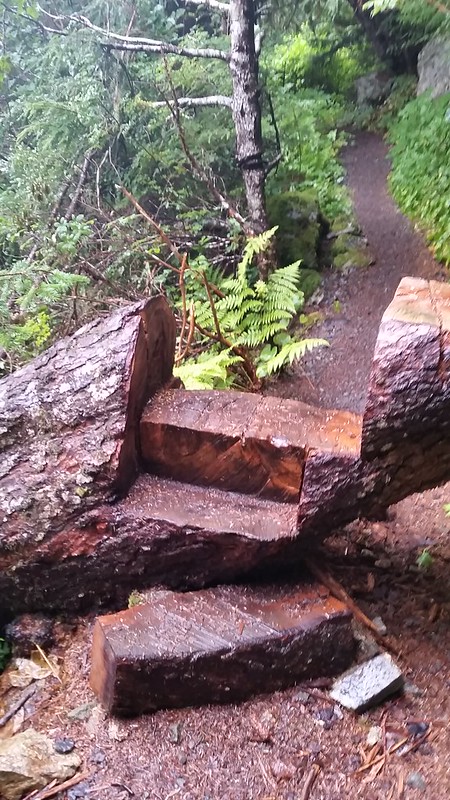 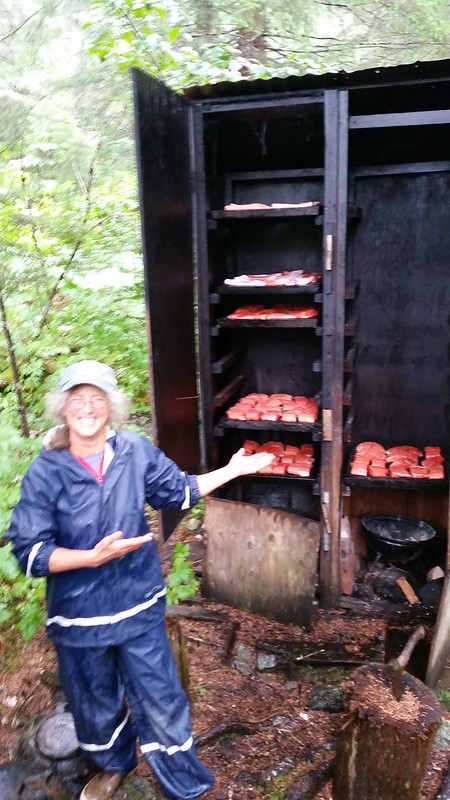 As we arrived at the end of the boardwalk we met a town resident filling a smoker with salmon. 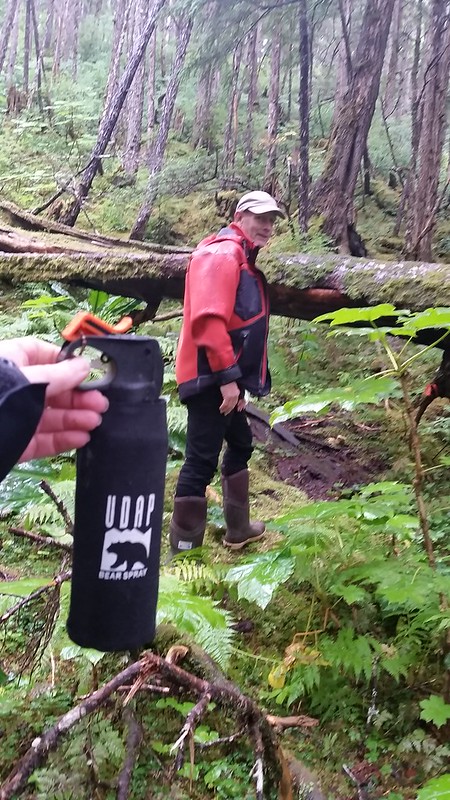 She showed us a trail that led up the hill to the muskeg and armed each of us with a can of bear spray for the hike. 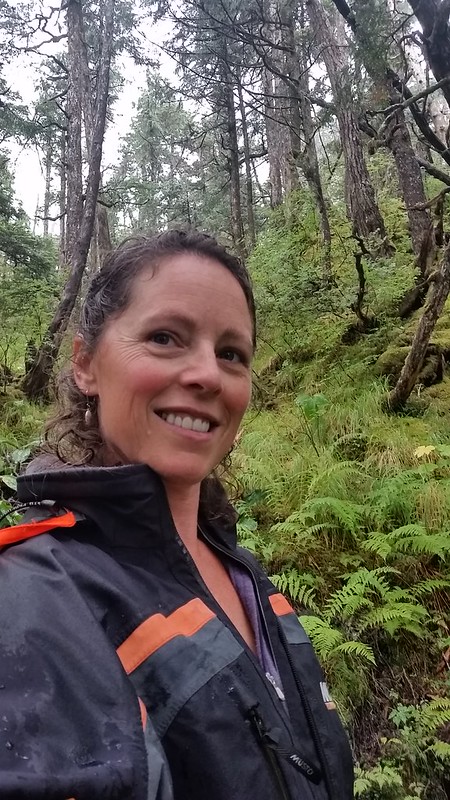 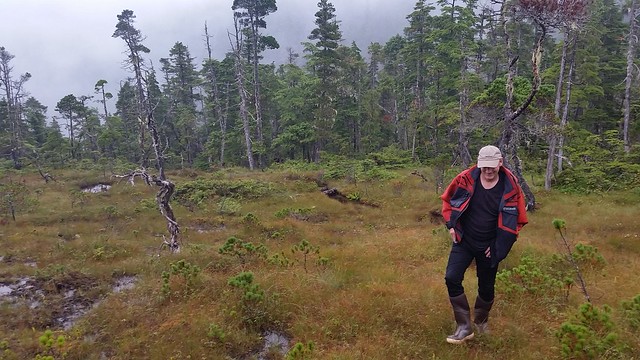 We arrived at our summit in dense fog, happy for the opportunity to eat berries and see the natural hillside.

Back at the boat it was a bouncy night with Irene and the dock often moving out of sync with each other in the ocean swell that was wrapping into the cove. We departed for Pelican early in the morning with visions of Oceanside hot springs on our agenda just around the corner from Pelican! 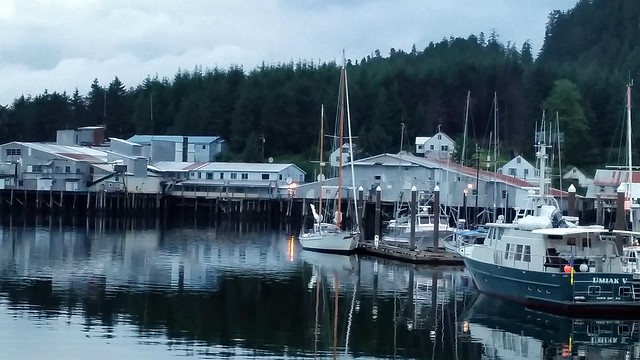 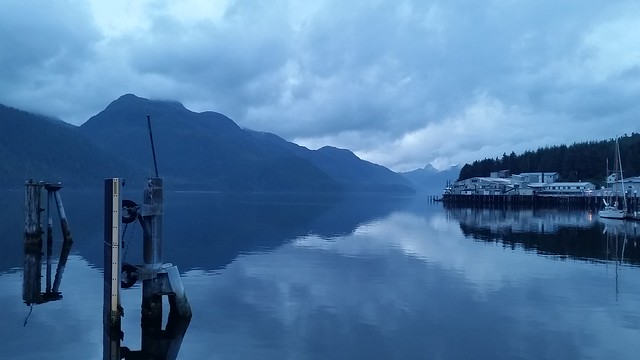 Pelican is a larger town than Elfin Cove, not as cutesy but similar – with wider boardwalks and few more ATVs. 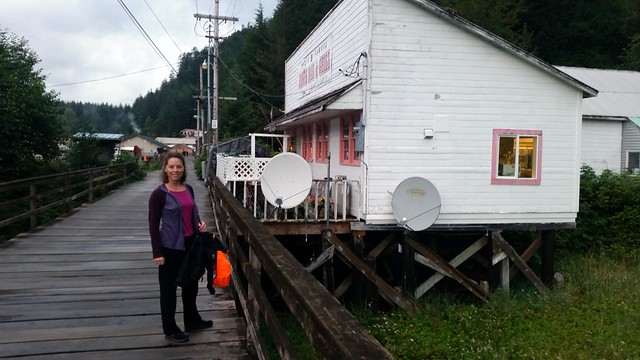 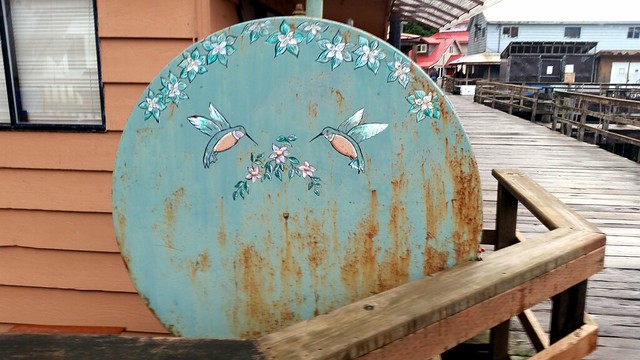 The population is shrinking, like much of small town America, and we felt a sense of nostalgia and of bygone eras. 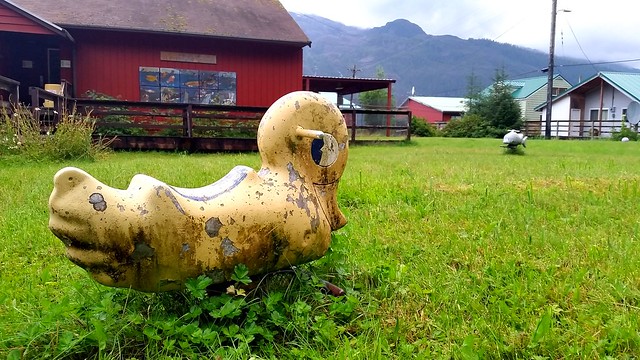 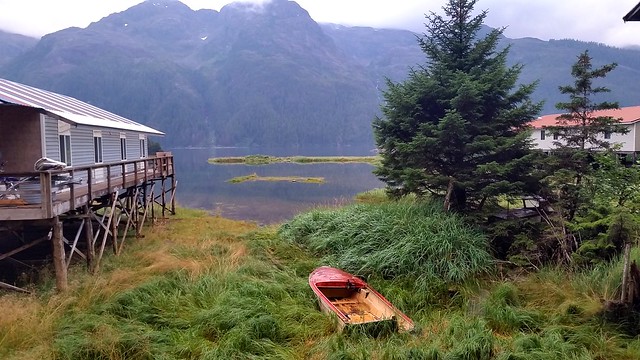 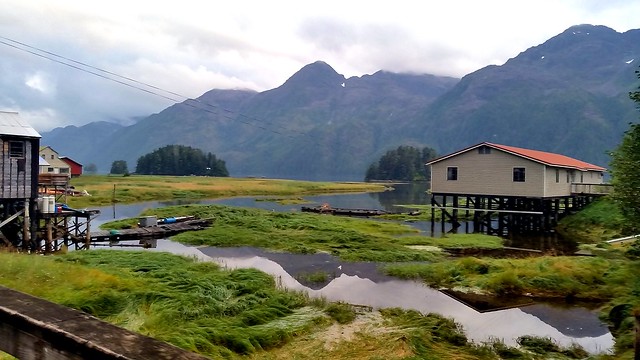 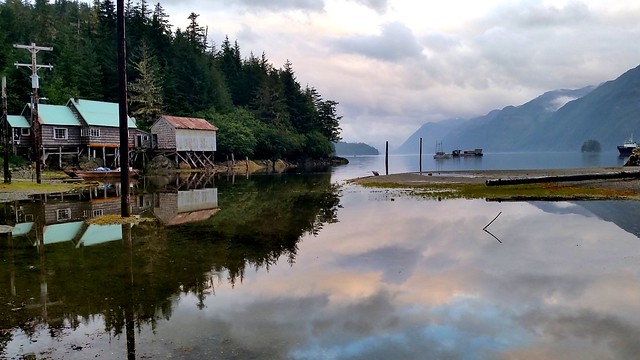 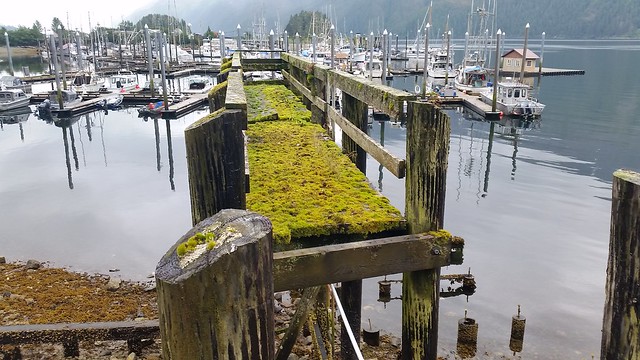 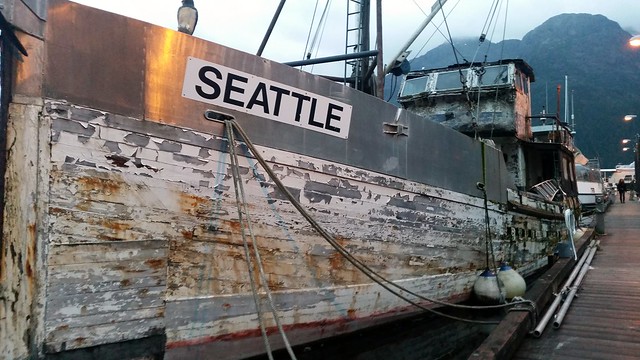 We listened to the 10 day weather forecast with a prediction of stormy weather and seas building to 10 feet on the ocean. Our hot spring, just 8 miles away, would be too dangerous to access with Irene in such weather and the seas too uncomfortable for us to want to go outside. Our planned visit to some ocean hot springs and Sitka was scratched and we turned the boat toward Juneau and the Inside Passage.

4 thoughts on “Returning to Southeast Alaska”