One gorgeous calm afternoon we dropped the hook in Big Alinchak Bay, completely enchanted by the quiet and beauty. 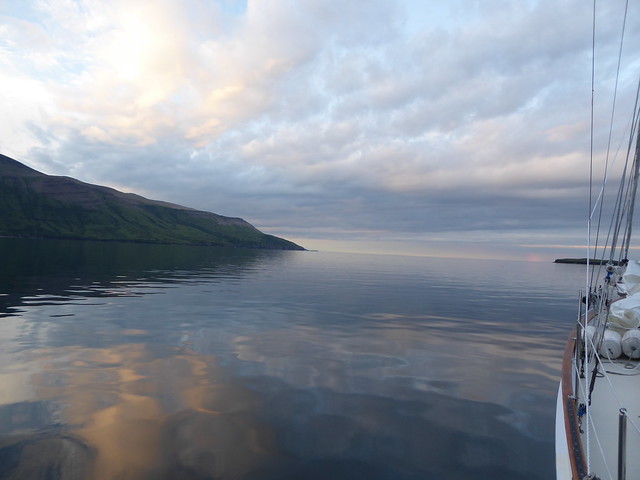 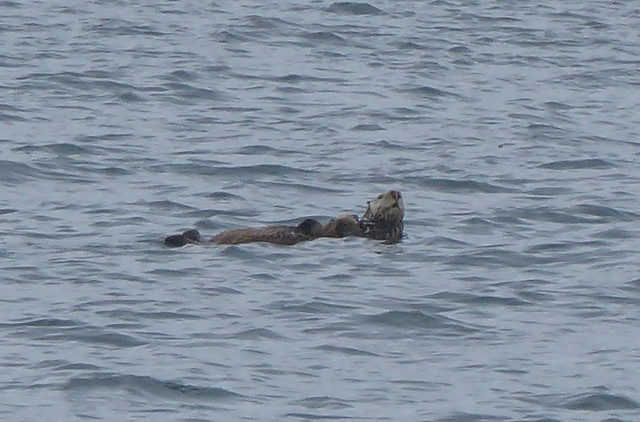 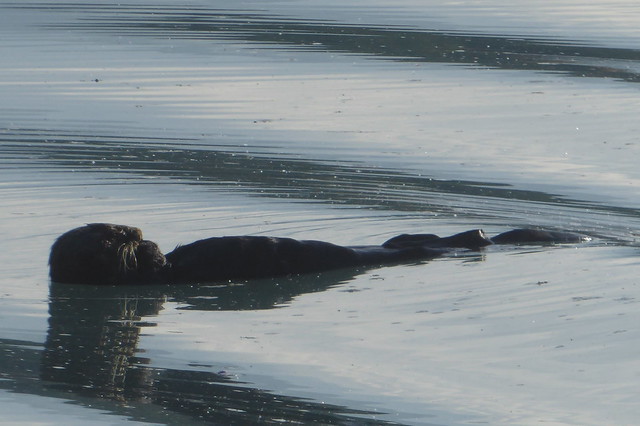 Sometime during that first night we heard the wind come up. Not a surprise, and nothing to worry about – we were very securely anchored in only about twenty feet of water, great holding, and the beach was close to windward so there was not much fetch (maybe two or three hundred feet of open water) where waves could build up. We had set our special snubber hook that leads the snubber line out to the end of the bowsprit and it was working as intended – taming the swings to port and starboard during the gusts and keeping the anchor chain from colliding with the bobstay chain. 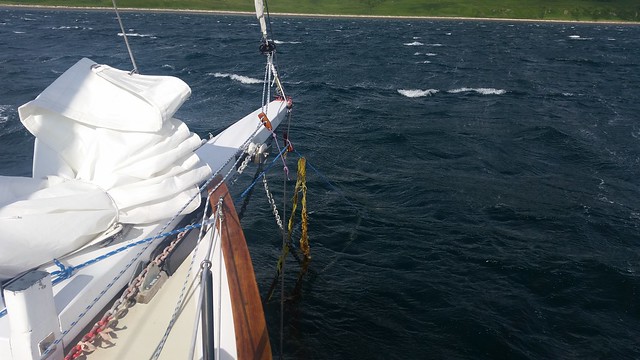 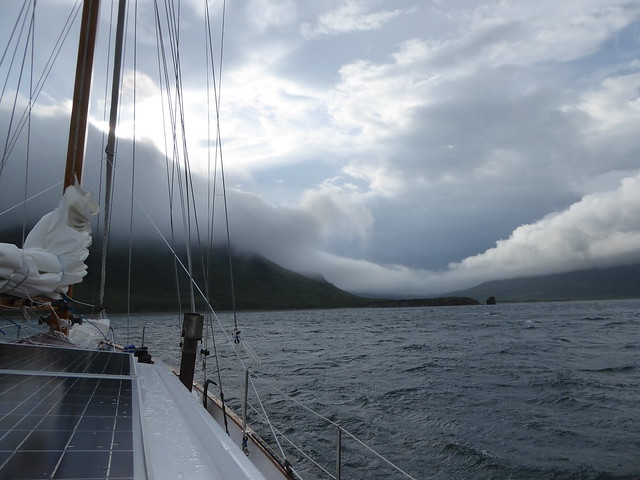 As we ate breakfast Ginger pointed at the clouds. She said, “Looks like Cape Doctor clouds.” We had experienced that famous strong wind at Cape Town in South Africa, and neither one of us will ever forget it. The peaks were blanketed in clouds with wisps pouring over the sides at the head of the anchorage. We decided it would be better to enjoy a rest day, stay on the hook for the day, and ride it out rather than head back out to sea and deal with the waves. Cape Doctor winds rarely lasted a long time, in any case. 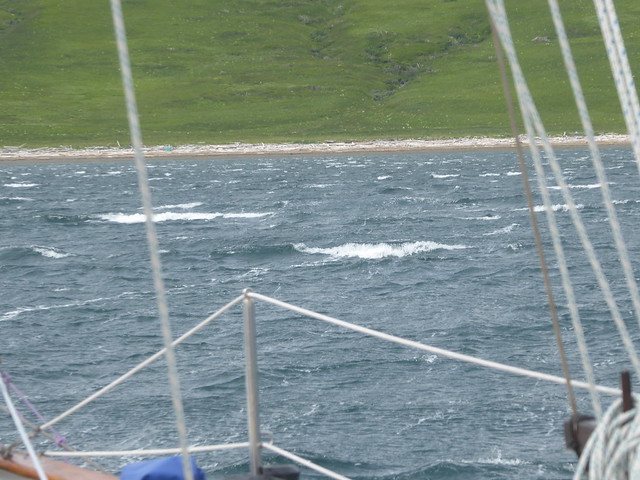 The wind built all day. Somehow a steep chop was growing like magic just a few feet from the beach, and Irene plunged. 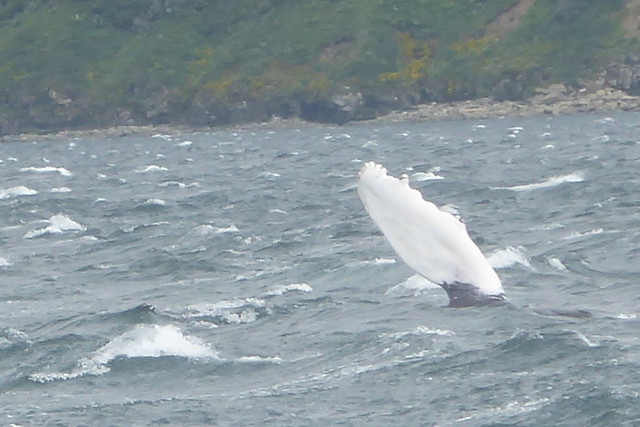 A whale cavorted nearby, jumping and splashing in shallow water near us. 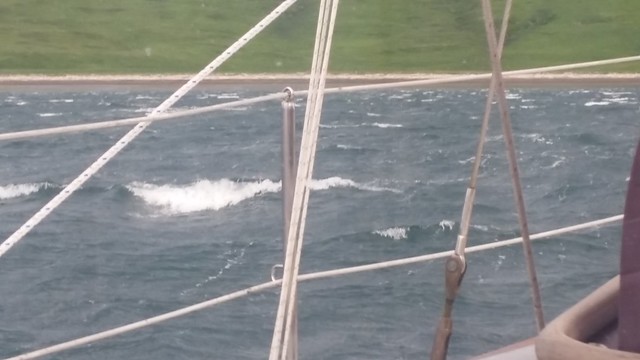 The load on the anchor chain and snubber grew with the wind and waves, so we disconnected the anchor snubber hook to take all of the strain directly on the bitts. We discussed leaving again in the evening, but decided to stay put. After all, the Cape Doctor rarely blows more than a few hours, so surely the wind would die overnight – and it’s risky to haul the anchor in 25 knots and white caps. 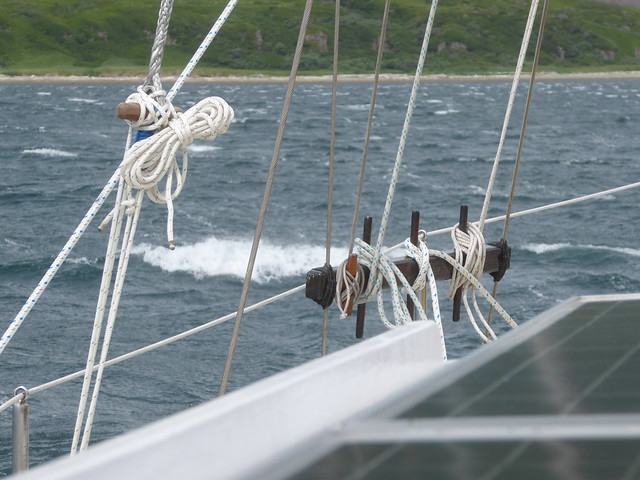 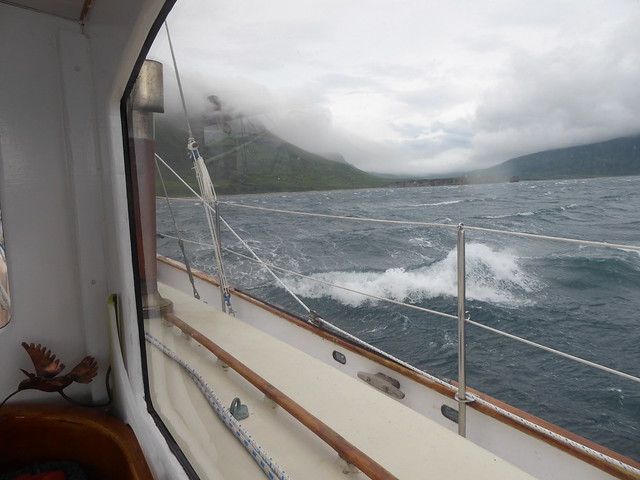 No, the wind did not die. We spent a long night on anchor watch in the cockpit taking cat naps when we could. During some point we turned the engine on and motored for a while to reduce the strain on anchor and chain, but stopped when the prop began to cavitate in the troughs. The wind shrieked in the rigging. We rigged two long heavy snubbers and eased them out a few inches every hour to put the chafe points in a new spot. Even so, every now and then a snubber would break with a bang and Peter would crawl forward and tie in a new one. When dawn came Peter found himself lying on the bowsprit taking dollops of cold saltwater in the face every few minutes as he worked. As an additional insult, when tying a new snubber just as the old one parted, the broken end gave him a nasty snap in the arm. Back in the cockpit we agreed, this is just NOT fun. So after 30 miserable hours of wind at anchor, we decided to cut and run out to sea, a tricky maneuver partly because the anchor chain was trailing the remnants of several broken snubbers, each one needing to be cut free before it reached the windlass chain wheel. Ginger motored Irene forward and somehow, despite the cavitating prop, kept the boat perfectly in position using the tiller and careful work with the throttle all the while ducking the heavy spray that was blowing the length of the boat. Peter tried to time pushing the windlass button to pull chain only as the bow dropped between waves reducing the load, but even so, twice the windlass electrical overload breaker tripped, forcing him to run inside to the engine room to reset. It all worked out, the anchor came to the surface and as Irene was blown out of the bay, we looked over our shoulders at the cape doctor clouds still pouring over the mountains. We were exhausted but felt lucky to escape with just a few bruises. 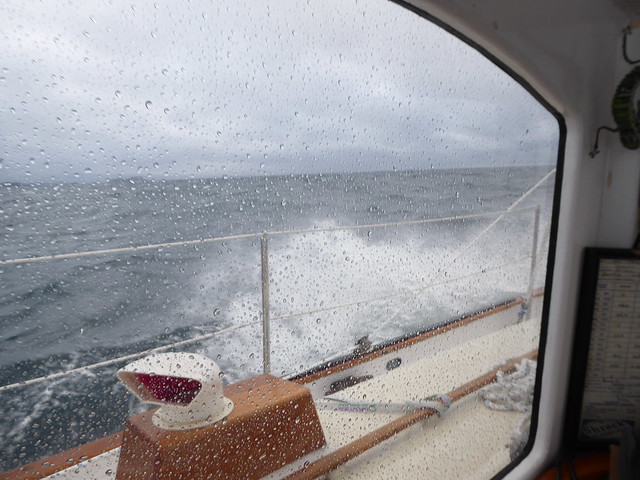 Outside the weather got better, and as we made our way northeast the wind dropped. We motored close to the land and enjoyed the view. 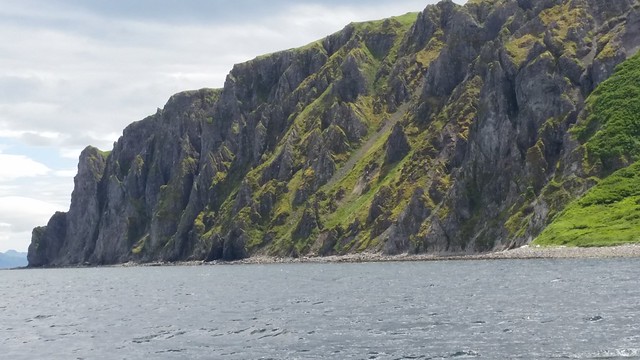 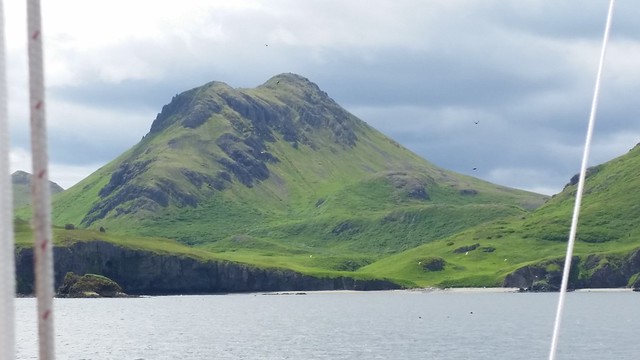 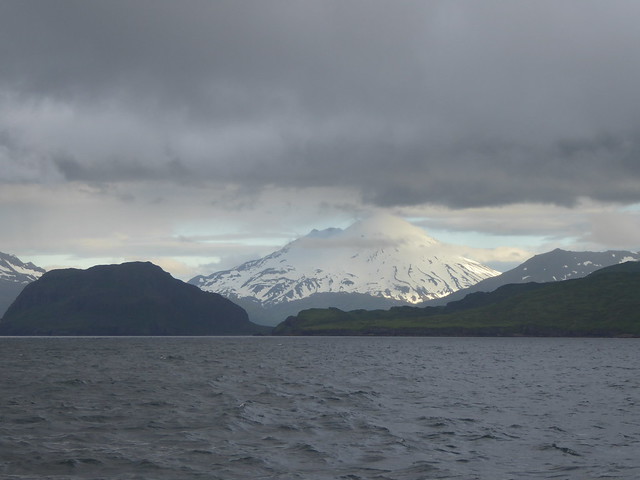 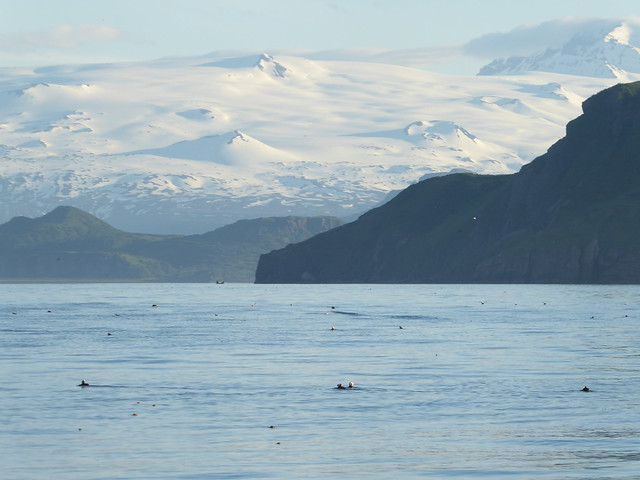 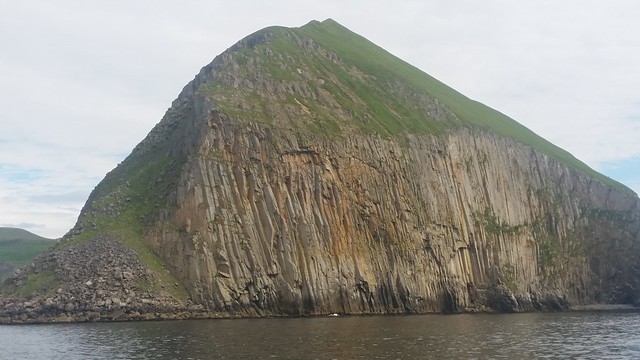 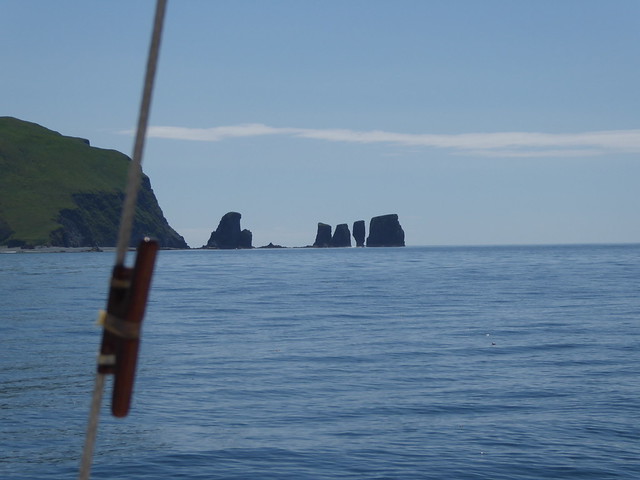 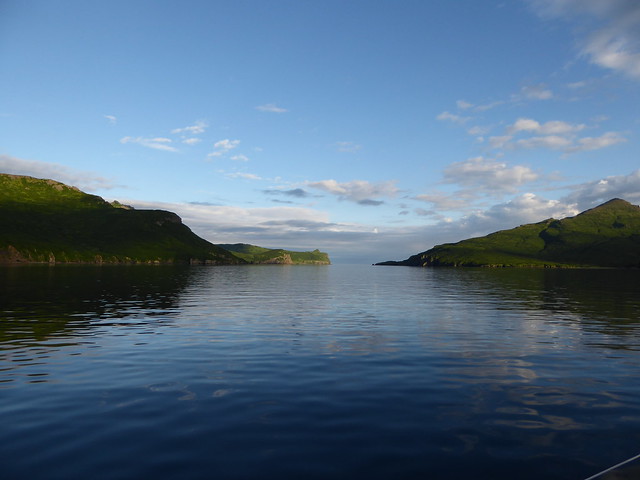 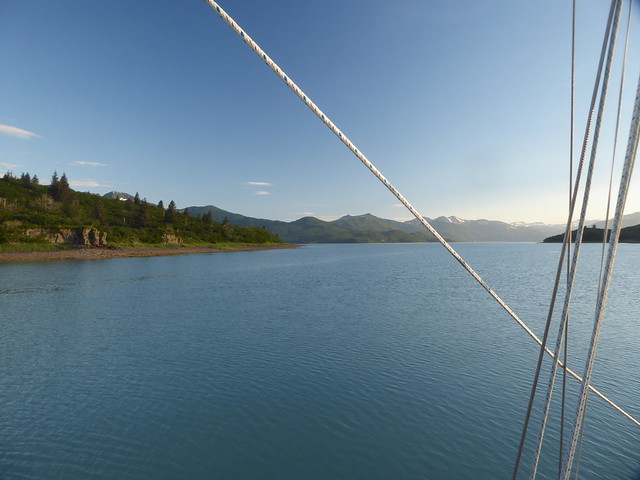 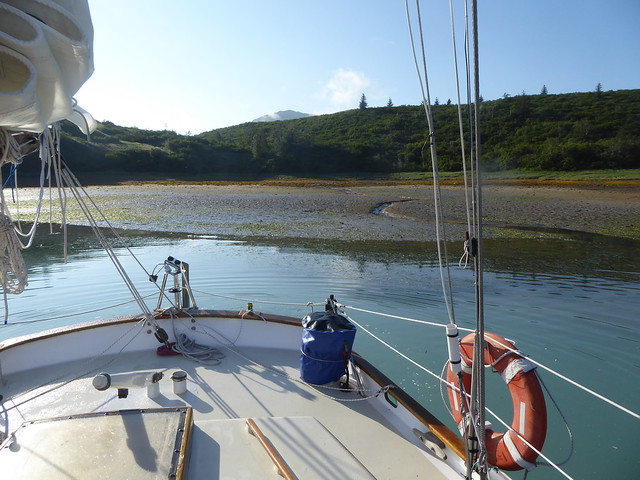 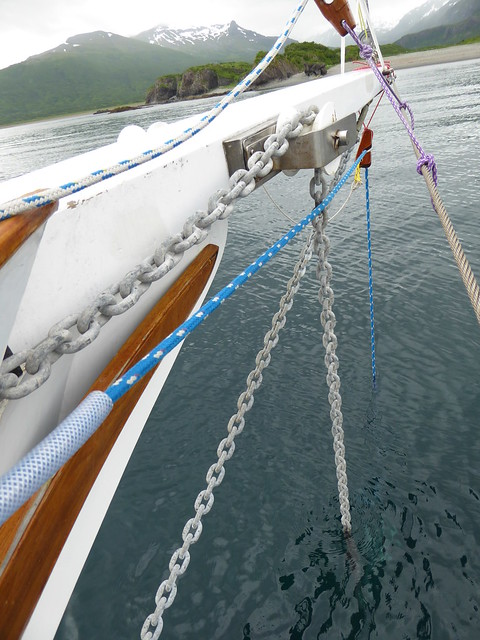 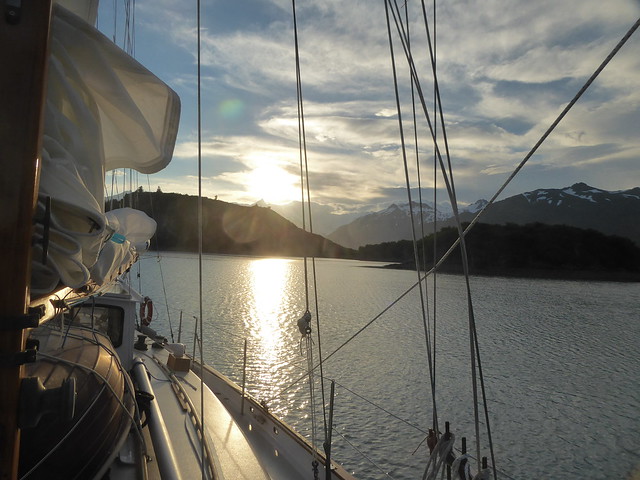 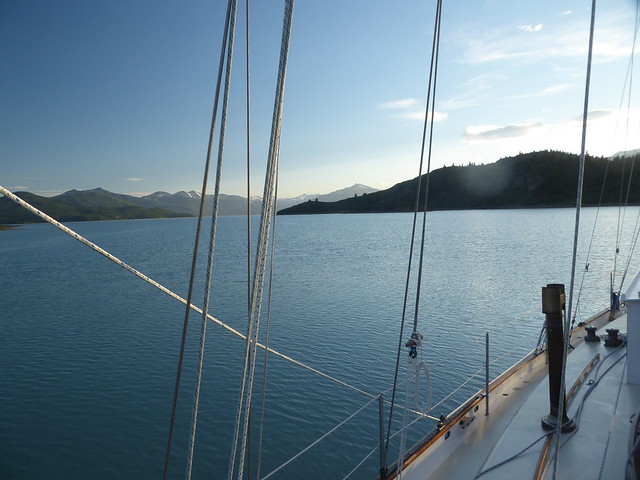 We caught up with domestic chores like baking and haircuts. 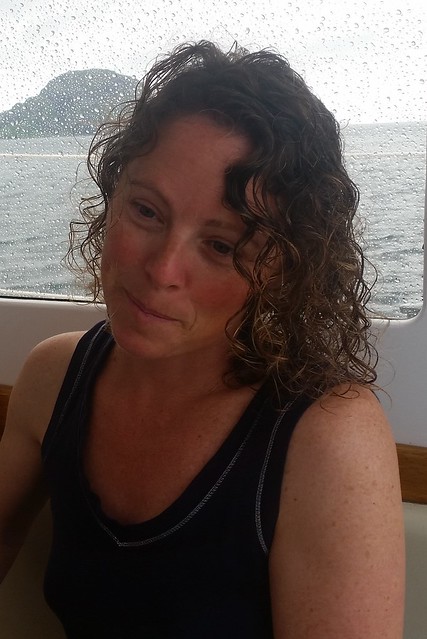 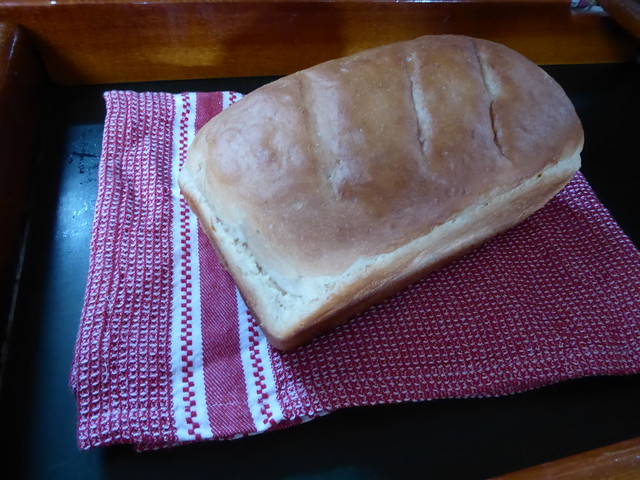 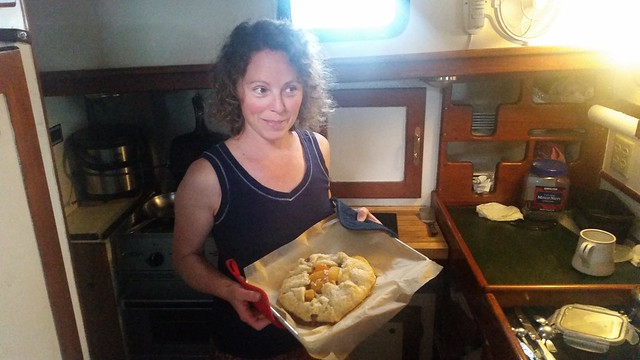 Sailing the Alaska Peninsula seems similar to sailing in Patagonia, but with bigger tides to add to the mix of williwaws, rocks, deep anchorages, and mountains – and no “Italian Guide” book. (The Italian Guide, which covers the Patagonia channels, may well be the best cruising guide we’ve ever used.) 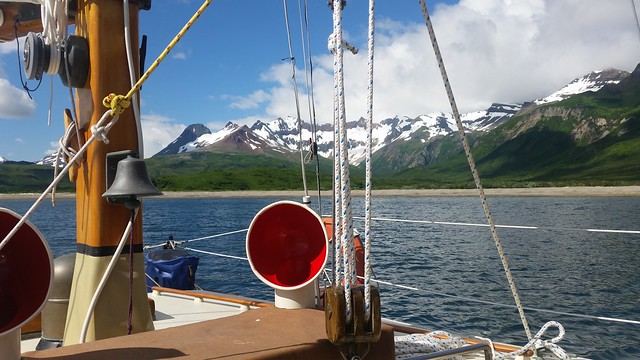 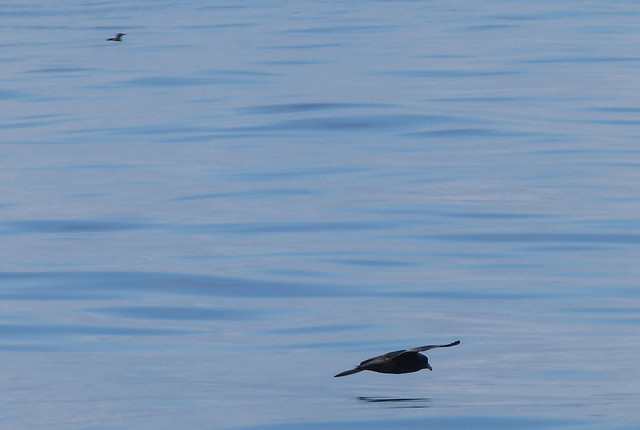 We finally left the Alaska Peninsula after a challenging month in that area, and enjoyed a rare passage under sail across Cook Inlet. So much of our time under way to date this summer has been under power. 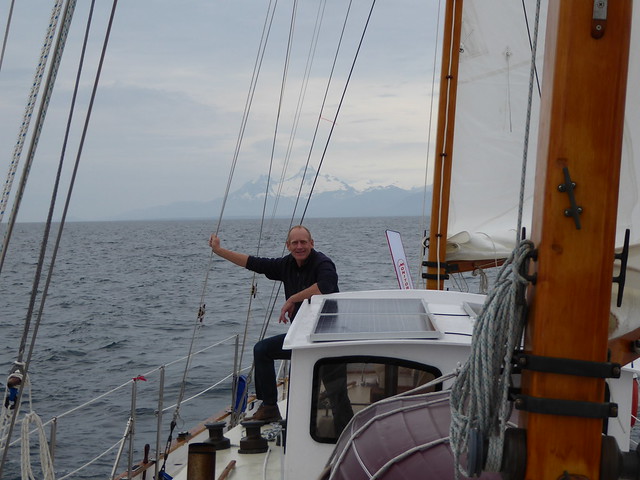 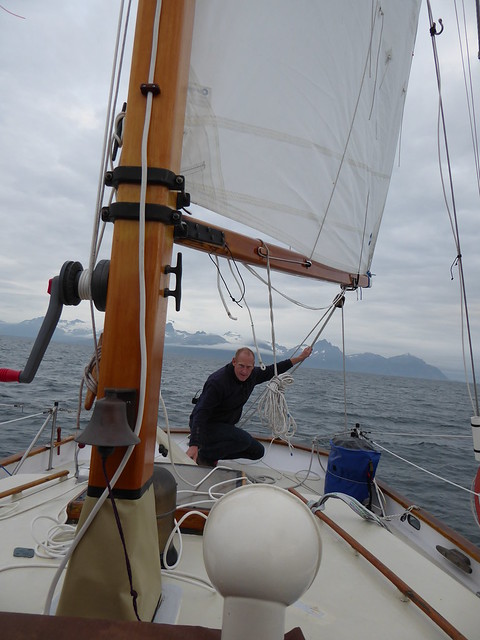 All the while, we are thinking, it’s probably still blowing a gale in Big Alinchak Bay.

3 thoughts on “NE to Homer AK”