Leaving Sitka there were a few things to be completed the morning of our departure. Peter tightened the forestay with some supervision from friends on the dock. 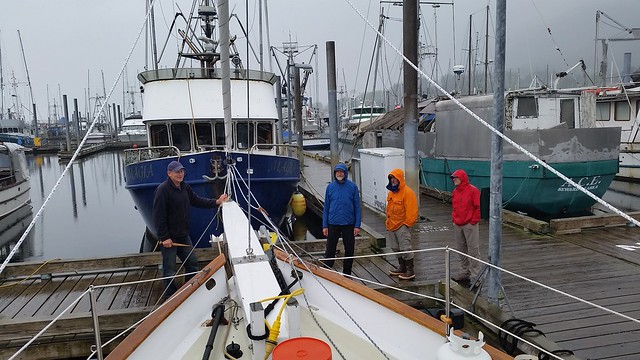 With all the motoring we’ve been doing we visited the fuel dock on the way out, and it was the best fuel stop we’ve enjoyed to date, the complimentary snacks were gone before we left the dock. 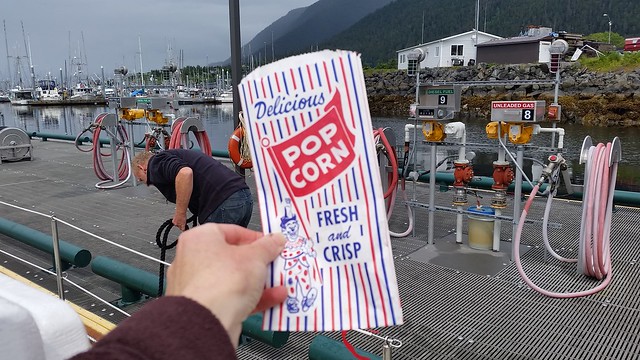 This was our first real passage (multiple days on open ocean) on Irene and it was to be a hop from Sitka to Dutch Harbor. It started well, with Irene charging away from Sitka under full main and jib at 7 and 8 knots under blue skies and a whale send-off. 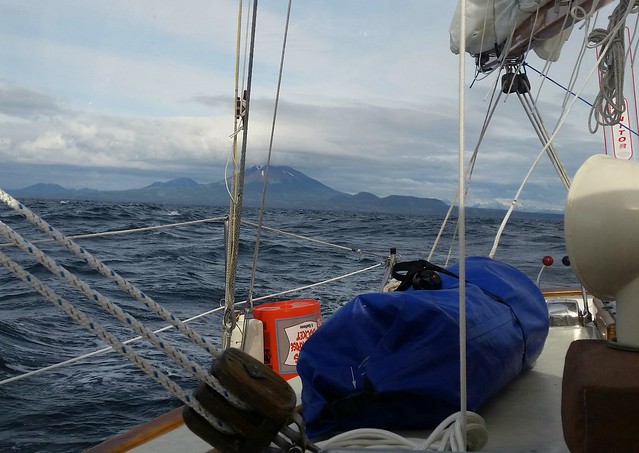 As the sun was setting, the wind was rising, the seas were building, and we had our hands full managing the conditions, reefing, furling, tying cabinet doors shut as the latches were not holding them in some waves – you get the idea. The conditions were perfect for discovering all the things that aren’t quite right. For example, when we were putting in the first reef, it was impossible to tell at the mast whether we were pulling on the correct reef line – first and second reef lines being the same color and texture. It got rougher, colder, and darker, and at some point during that thankfully brief night it became obvious that we should put in somewhere to correct some of the issues that came up. So, in the morning as the wind was easing and the seas laying down we altered course a few degrees to head to Kodiak for repairs. 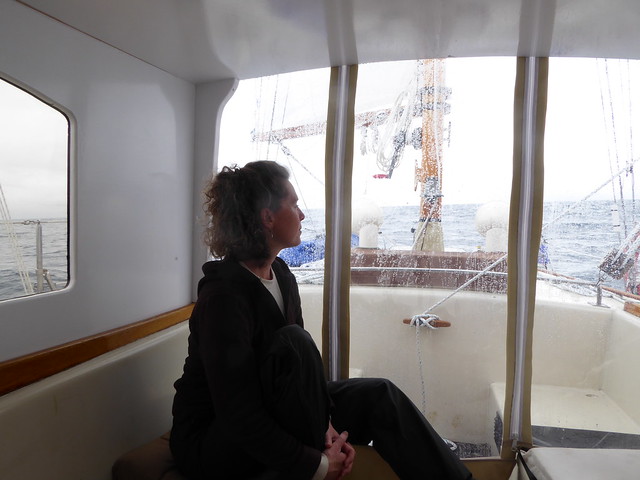 The new doghouse curtain sewn in Sitka was a success during the crossing.

The late sunsets allowed for plenty of daylight to watch for logs and hazards. Sunset at 11 o’clock takes some getting used to. 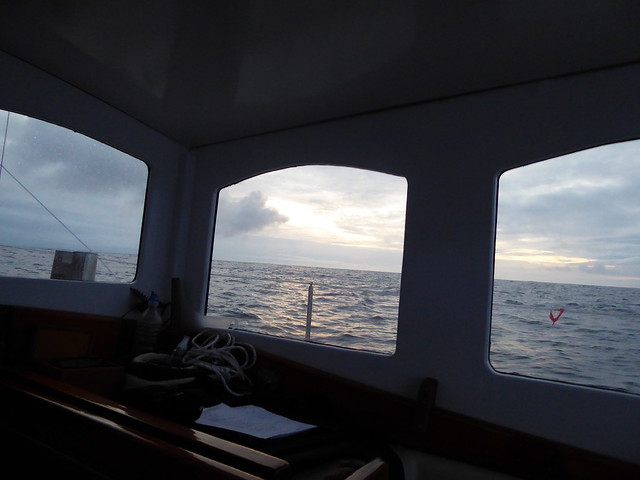 The rest of the passage was uneventful except for a few visits by Dall’s porpoises and as the seas became more predicable we enjoyed the trip. 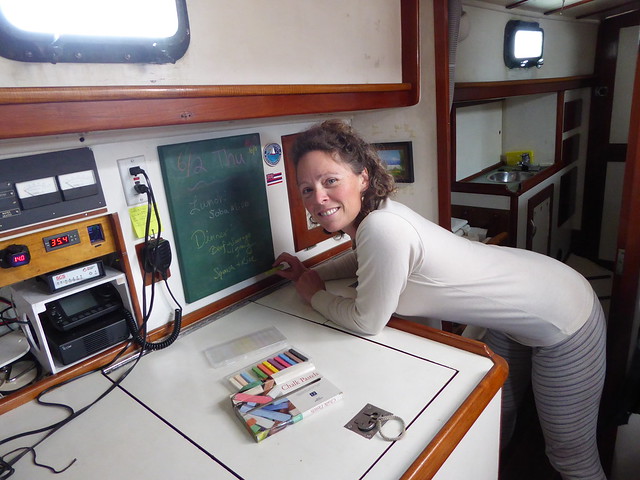 We arrived in Kodiak after four days. 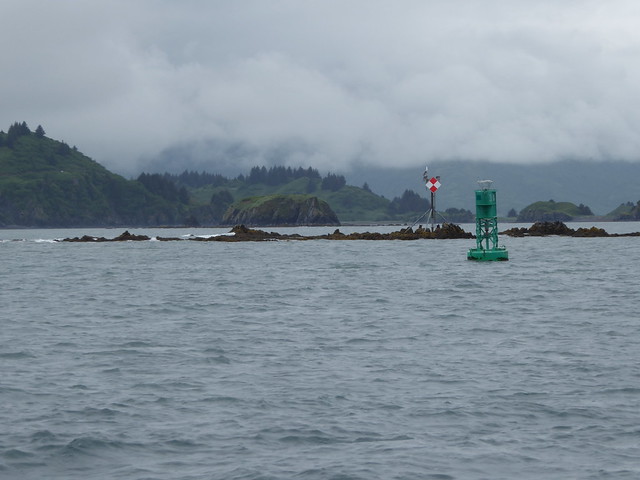 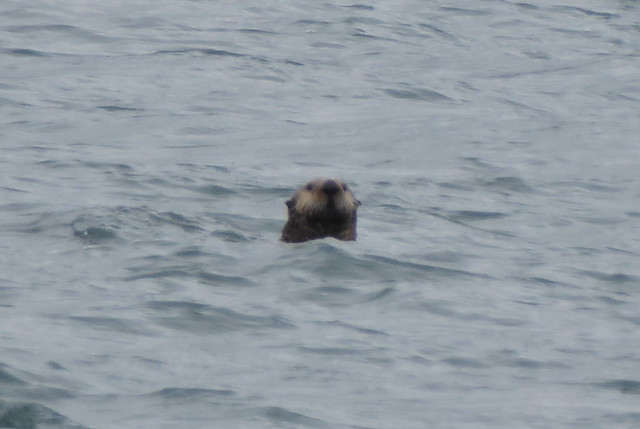 Kodiak was good to us. Puffins and otters and eagles; hardware, hydraulic, and grocery stores, SHOWERS!!

If our time on this trip can be judged by showers during a stop then we’re getting more organized. In Ketchikan we had no time for showers and left without taking even one. In Sitka we had time for one shower but the second attempt was thwarted by a locked door. In Kodiak we had TWO showers during our stay, with unlimited hot water – albeit in a shared public pool locker room thanks to a hint from our Sitka friends Fran and Jim who live in Kodiak a few years ago. 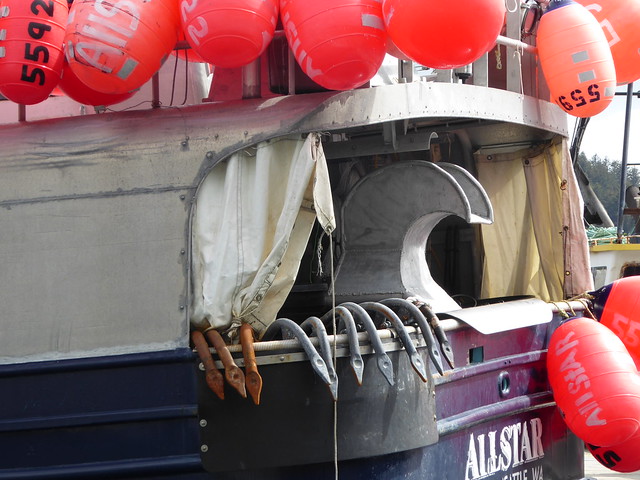 It was time to leave the fish boat harbor and we were grateful for the quiet of our first night back at anchor. 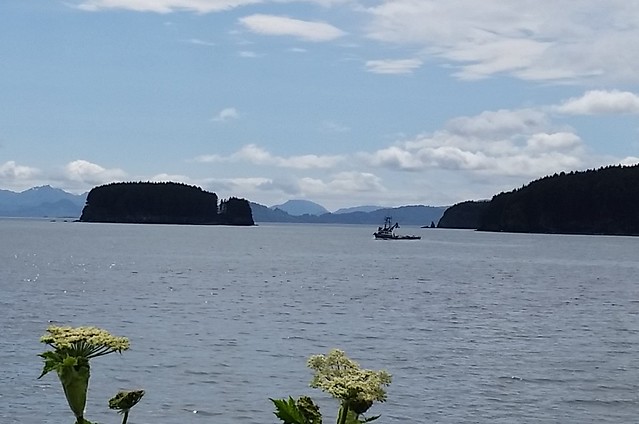